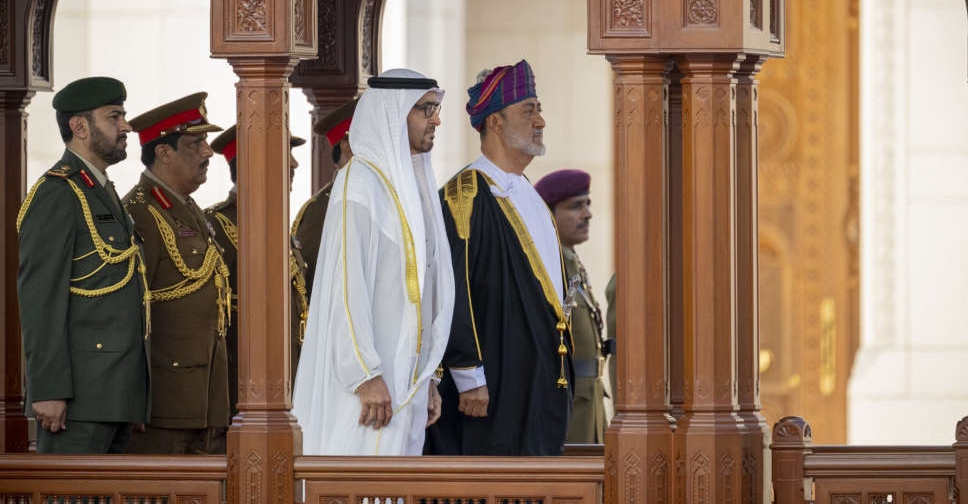 The UAE's President His Highness Sheikh Mohamed bin Zayed Al Nahyan has departed from Muscat, concluding his two-day state visit to the Sultanate of Oman.

His Majesty Sultan Haitham bin Tariq accompanied Sheikh Mohamed to the airport to bid him farewell.

On the sidelines of Sheikh Mohamed's visit, the two countries signed a number of MoUs aimed at expanding cooperation in several areas, including industry, advanced technology, energy, rail connectivity, higher education, scientific research, the cultural and youth sectors and the exchange of news.

Additional agreements were signed regarding the exchange of information to combat money laundering and prevent crime, as well as the financing of terrorism.

The discussions between Sheikh Mohamed and Sultan Haitham focused on opportunities for further collaboration and they praised the progress made in the political, security, scientific, economic and cultural sectors for the mutual benefit of the two nations.

The two leaders also welcomed the effective communication between the governments of both countries to strengthen bilateral relations and stressed the important role played by the Oman-UAE Higher Joint Committee.

They reaffirmed their determination to motivate the public and private sectors to develop and diversify economic ties and announced that a number of projects will be launched in sectors including transportation and infrastructure to boost UAE-Oman integration.

In addition, the two sides discussed regional and international issues and agreed to coordinate their approach to support and enhance security and stability.

Sultan Haitham also congratulated Sheikh Mohamed on the UAE being chosen to host COP28 in 2023.

Sheikh Mohamed thanked the Sultan and the Government and people of Oman for their warm reception and generous hospitality, and wished Oman continued progress and prosperity.

Sultan Haitham also expressed his best wishes for further progress and prosperity for the UAE and its people.