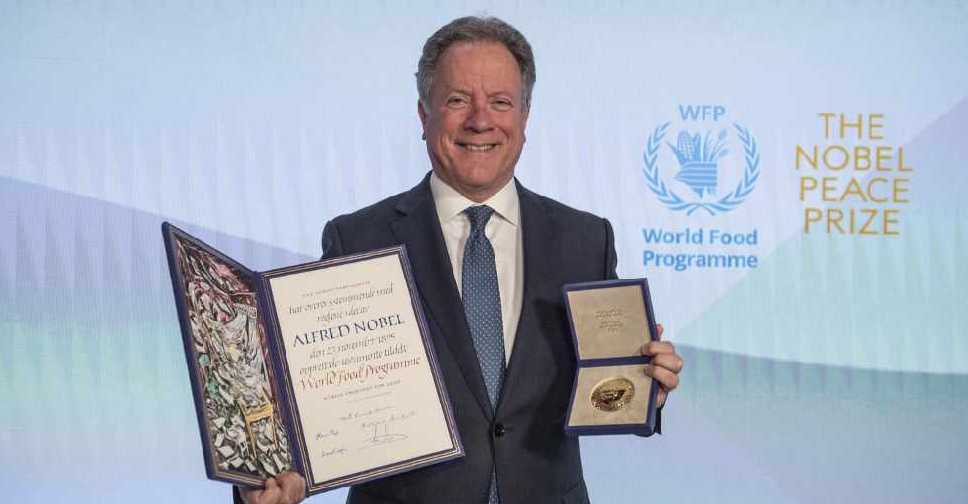 Some 270 million people worldwide stand on the brink of starvation, the United Nations' World Food Programme (WFP) said on Thursday upon receiving the Nobel Peace Prize.

The number is equivalent to the combined populations of Germany, Britain, France and Italy.

The WFP, which has coordinated medical logistics during the coronavirus pandemic, was announced winner of the award for 2020, in October.

"Because of so many wars, climate change, the widespread use of hunger as a political and military weapon, and a global health pandemic that makes all of that exponentially worse — 270 million people are marching toward starvation," David Beasley said from the WFP headquarters in Rome, upon receiving the Nobel medal and diploma.

"Failure to address their needs will cause a hunger pandemic which will dwarf the impact of COVID. And if that's not bad enough, out of that 270 million, 30 million depend on us 100% for their survival," he added.

Instead of the usual ceremony at the Oslo City Hall before dignitaries including Norway's King Harald, WFP officials stayed in Rome due to the coronavirus pandemic.

They are expected to travel to Oslo at a later stage to deliver the traditional Nobel lecture.

The remaining Nobel awards - for medicine, physics, chemistry, literature and economics - which are traditionally handed out in Stockholm - have also been moved online.

The ceremonies are held every year on December 10, the anniversary of the death of Swedish industrialist Alfred Nobel, who founded the awards in his 1895 will.

We are so honored to accept the #NobelPeacePrize today. At the same time, it is my tragic duty to tell you that famine is at humanity’s doorstep.

The silver lining is that we can stop this together. Join us as we call for urgent action. pic.twitter.com/nZOSxAae7M

"Because of so many wars, climate change, the widespread use of hunger as a political and military weapon, and a global health pandemic that makes all of that exponentially worse —270 million people are marching toward starvation."