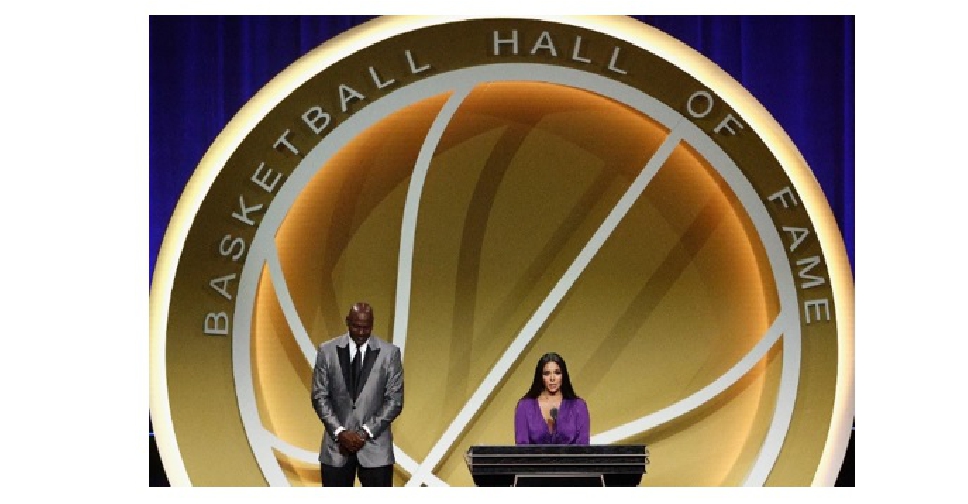 Vanessa Bryant stood at the podium on Saturday evening as her late husband Kobe was being formally inducted into the Naismith Memorial Basketball Hall of Fame, and she noted that she always avoided praising the former Los Angeles Lakers star in public.

"Someone had to bring him back to reality," Vanessa Bryant said. "Right now, I'm sure he's laughing in heaven because I'm about to praise him in public for his accomplishments on one of the most public stages."

Vanessa's stirring speech was the highlight of the ceremony in Uncasville, Conn., in which Kobe Bryant was one of the nine members of the 2020 Hall of Fame class. NBA legends Tim Duncan and Kevin Garnett were among the other inductees.

The induction ceremonies were delayed a year due to the effects of the coronavirus pandemic.

Kobe Bryant died at age 41 on January 26, 2020, in a helicopter crash in Southern California. His 13-year-daughter Gianna also died in the crash as did seven others, including the pilot.

Kobe Bryant was presented by Michael Jordan, a player he looked up to as a child.

Vanessa Bryant said Kobe was greatly looking forward to the induction ceremony with the award basically being the topper to his stellar 20-year NBA career.

"Kobe's personal stats speak for themselves, Kobe was on a different level," Vanessa Bryant said. "He never took shortcuts when it came to basketball. He gave this game his all."

Vanessa Bryant touched on several aspects of Kobe's career, including the April night in 2013 when he tore his Achilles at age 34. The badly hurt Kobe Bryant somehow made it to the free-throw line to make the two shots before soon limping off the floor.

Vanessa Bryant knew immediately that this injury was different because Kobe didn't blow her a kiss from the arena tunnel.

Kobe Bryant returned from the injury eight months later but after just six games, he suffered a season-ending knee injury. However, he ended up playing 107 games after the type of Achilles injury that would've ended many careers.

Vanessa Bryant's speech had already prompted tears throughout the audience but her final remarks, directed to Kobe, only ramped up the emotional vibes in the room.

"You did it, you're in the Hall of Fame now," Vanessa Bryant said. "You're a true champ. You're not just an MVP, you are an all-time great. I'm so proud of you. I love you forever and always, Kobe Bean Bryant."

Duncan, a five-time NBA champion who spent his entire 19-year career with the San Antonio Spurs, was presented by former Spurs teammate David Robinson, the 2009 Hall of Fame inductee who was the face of the franchise when Duncan was selected No. 1 overall in the 1997 draft.

Duncan, an assistant coach with the Spurs, singled out San Antonio coach Gregg Popovich, and said "he's going to be mad at me" before paying tribute to the legendary "Pop."

Garnett spent most of his 21-year career with either the Minnesota Timberwolves and Boston Celtics. The 15-time All-Star, who won a title with the Celtics in 2008, was known for high-level intensity that never took a calming break.

"A lot of people don't know I'm from South Carolina. I'm a country boy. I like to say that," Garnett said. "Helped hone my skills. My mother is a very intense and passionate woman, who cared about her craft, cared about the quality of her craft, and I think I took some of that from her. So if you guys want to blame me, or blame the intensity, blame her for that. I want to thank my mother, Shirley, for that."

Mulkey won three national titles at Baylor and recently departed the school to become coach at LSU. Her message is that coaching players isn't solely about winning.

Stevens recorded 1,058 career victories before retiring in 2020 and won a Division II national title with Bentley University in 2014, while Catchings was a 10-time WNBA All-Star, league MVP in 2011 and was the Naismith college player of the year at Tennessee for the 1999-2000 season.

Tomjanovich starred for the Rockets as a player and later coached the team to back-to-back titles (1994-95), Sutton guided four schools to the NCAA Tournament and made three Final Four appearances, and Baumann was a longtime FIBA executive.

Sutton and Baumann were inducted posthumously along with Bryant.

The 2021 Naismith Hall of Fame class is slated to be announced on Sunday.