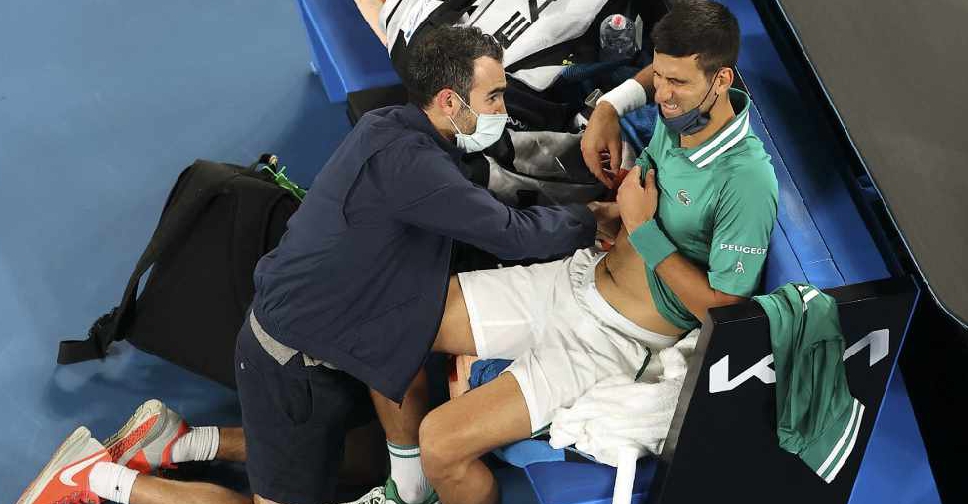 World number one Novak Djokovic skipped practice after suffering from a "muscle tear" as the wait continued over the defending Australian Open champion's ability to contest his fourth round match.

The 33-year-old, a record eight-time winner on the Melbourne Park Arena, slipped during the third set of Friday's third-round match against Taylor Fritz and disappeared off Rod Laver Arena for treatment.

The Serbian, who said he was sure it was a muscle tear on his right side, required further attention on the injury during the third set before he went on to script a five-set win and set up a clash against Milos Raonic on Sunday.

The 17-time Grand Slam winner was not certain he would be able to recover from his injury and was missing from Saturday's official training list at Melbourne Park.

Reports said Djokovic will undergo scans on Saturday before a decision on his title defence will be taken.

Djokovic's team did not immediately respond to request for comment on the reports.

The Serbian was allowed the maximum time possible to recover by the organisers and his match against Canadian Raonic was listed as the final match of Sunday evening on Rod Laver Arena.

Australian Open Chief Executive Craig Tiley was, however, confident that he will be able to overcome his injury and compete on Sunday.

"He'll wake up today and he'll figure out what it is and he'll go and get the appropriate treatment. The way he was, those two sets, I was pretty surprised.

"But I've seen him play here, this is his court, he gets comfortable on it and he just picks his game up and up and he's that good."