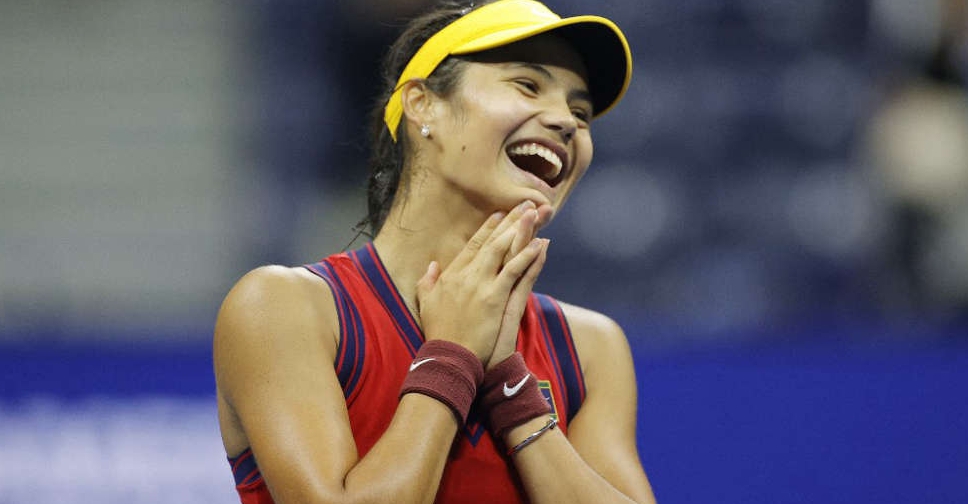 British teen Emma Raducanu stunned the tennis world by becoming the first qualifier to reach a Grand Slam final after beating Greece's Maria Sakkari 6-1 6-4 in her US Open semi-final.

With British tennis royalty Tim Henman and Virginia Wade looking on, Raducanu fended off seven break points across her first two service games and capitalised on a trio of double faults from Sakkari on the way to a 5-0 lead in the first set.

Down a break in the second set, Sakkari then fought off five break points in a near 10-minute seventh game but the 18-year-old Raducanu would not be denied the victory and went on to seal the match and set up a final against 19-year-old Canadian Leylah Fernandez.

"Honestly I just can't believe it. A shock. Crazy," she said. "To be in a Grand Slam final at this stage of my career, yeah, I have no words."

Playing in just her fourth tour-level tournament, Raducanu has not dropped a set in New York and completely outmatched 17th seed Sakkari, who reached the Roland Garros semis this year.

"Today was always going to be a very difficult match, to play against Maria Sakkari. She's an unbelievable player, probably one of the best athletes out there on tour," she said.

"I knew before the match I was going to have to play some of my best tennis if I wanted a chance."

The Greek had 33 unforced errors in the one hour and 24-minute match and struggled mightily with her first serve.

"It's tough to get yourself back in the match when nothing is going right and everything is going very good for the opponent," Sakkari told reporters.

She also had to leave the court early in the match because her skirt was not the right size.

"I took the wrong size of my skirt. It was a size larger," added Sakkari. "I could not play. It was falling. I was pretty quick, though."

Raducanu, who electrified British tennis with her run to the fourth round of Wimbledon, has been embraced by the rowdy crowds in New York and beamed up at the stands inside Arthur Ashe Stadium after closing out the match with a forehand winner.

"Since I've been in New York for my first round qualies match I've had unbelievable support in New York and you guys have made me feel right at home," she said.

"I was just so excited to come out here and play in front of you guys."

Raducanu said she had a packed schedule ahead of the US Open and was not sure how she would play.

"In a way my tennis level has surprised me in the way that I've managed to step up against some of the best players in the world," she added.

A win in Saturday's final would see a jump to number 24 in the rankings for Raducanu, who left school this summer and parted ways with prominent coach Nigel Sears after Wimbledon in favour of her youth coach Andrew Richardson.

Raducanu now has the chance to become the first British woman to win a Grand Slam since Wade won Wimbledon in 1977, though she said she knew little of the reaction to her performances back home.

"I'm honestly just here physically and also I give my phone away, like I don't really check it," she said. "But yeah, I'm very appreciative of all the support."