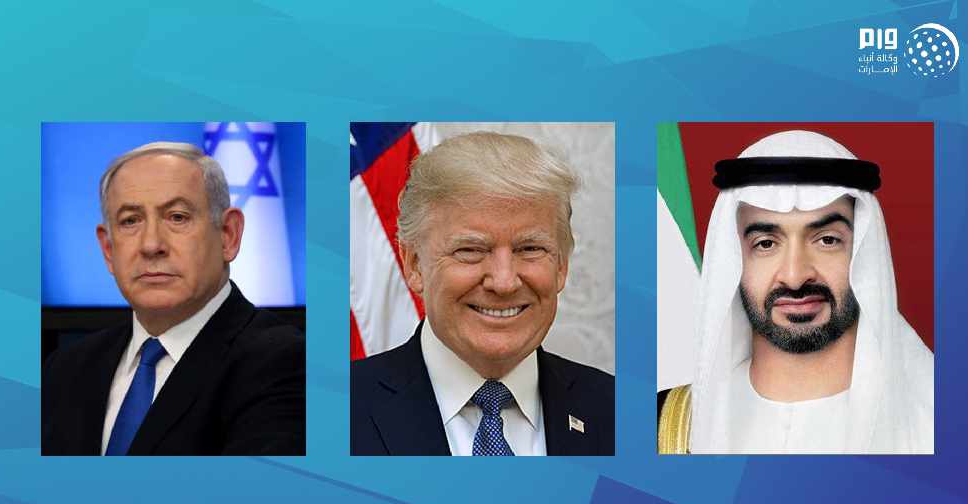 International leaders have praised the three-way diplomatic efforts of the UAE, the United States and Israel in forging a new alliance to suspend its planned annexation of areas of the occupied West Bank.

King Hamad bin Isa Al Khalifa of Bahrain congratulated His Highness Sheikh Mohamed bin Zayed Al Nahyan, Crown Prince of Abu Dhabi and Deputy Supreme Commander of the UAE Armed Forces, on the historic step taken by the UAE towards Israel saying it will contribute to strengthening peace and stability in the Middle East.

He praised the peace treaty between the UAE, the US and Israel that allowed the stopping of the Israeli decision to annex Palestinian territories, describing it as a ''historic diplomatic achievement'' that will preserve the two-state solution and maintain the opportunities for peace between the Palestinians and the Israelis.

The Sultanate of Oman also expressed its support for the UAE's decision. The Omani Ministry of Foreign Affairs said in a statement that 'the Sultanate of Oman hopes the agreement will contribute to achieving the comprehensive, just and lasting peace in the Middle East and fulfil the aspirations of the peoples in the region in sustaining pillars of security and stability and create factors for progress and prosperity for all".

According to the national news agency WAM, John Rakolta, the US Ambassador to the UAE, highlighted that in establishing relations with Israel, Sheikh Mohamed has shown once again that the UAE is a leader in the region, becoming the first country of the Gulf Cooperation Council to recognise the benefits that normalisation will bring to the nation and to its citizens.

"We look forward to increased cooperation between the UAE and Israel, as two of the most advanced nations in the region work together on issues as critical as healthcare, food security, and trade," Rakolta said.

"The United States is proud of its two great friends - the United Arab Emirates and Israel - and we applaud their vision and leadership in advancing regional peace now and in the future."

The European Union’s executive has welcomed the agreement to normalise diplomatic ties, saying it would benefit both countries and help promote stability in the Middle East.

Josep Borrell Fontelles, High Representative of the EU for Foreign Affairs and Security Policy tweeted: ''I welcome Israel-UAE normalisation; benefits both and is important for regional stability.

''Suspending annexation is a positive step, plans should now be abandoned altogether. EU hopes for resumed Israeli-Palestinian negotiations on 2-state solution based on international agreed parameters."

"I hail the courageous decision by the United Arab Emirates and its desire to contribute the establishment of a just and lasting peace between the Israelis and Palestinians," Macron wrote.

"I have just spoken to Israeli Foreign Minister Gabi Ashkenazi on the telephone and offered him my congratulations on this historic step. The normalisation of relations between Israel and the United Arab Emirates is an important contribution to achieving peace in the region. It is good that the Israeli Government has agreed to suspend its annexation plans," he said.

"We hope that this agreement will be the starting point for further positive developments in the region and that it can also inject fresh impetus into the Middle East peace process. We continue to maintain that only a negotiated two-state solution can bring lasting peace to the Middle East. Together with our partners in Europe and the region, we have been working intensively in recent months to prevent an annexation and to support the resumption of direct negotiations. We are also prepared to lend our active support to this process," added the statement.

Italy welcomed the announcement via a statement from its Ministry of Foreign Affairs and International Cooperation.

''In this framework, the Israeli decision to suspend the annexation of portions of the West Bank is a positive development, which we hope will facilitate the resumption of direct negotiations between Israelis and Palestinians aiming at a just, sustainable and lasting two-state solution, which Italy continues to strongly support as the only alternative to ensure peace and prosperity throughout the region,'' the statement read.

The Kingdom of Belgium heralded the "rapprochement between Israel and the UAE, facilitated by the US, as a step towards peace in the region".

Philippe Goffin, the Belgian Minister of Foreign Affairs and of Defence, said: "The announcement of the suspension of annexation plans is a step in the right direction, but should be converted into a definitive measure."

India's official spokesman of the Ministry of External Affairs commended the move during their virtual weekly media briefing.

"India has consistently supported peace, stability and development in West Asia, which is its extended neighbourhood. In that context, we welcome the full normalisation of ties between UAE and Israel. Both nations are key strategic partners of India," the spokesman said.

''India continues its traditional support for the Palestinian cause. We hope to see early resumption of direct negotiations to find an acceptable two-state solution."

The Japanese government also welcomed the deal. A statement issued by the Japanese Ministry of Foreign Affairs described the agreement to halt Israeli annexation of the Palestinian territories as a "positive move and a first step toward easing tension and stabilisation in the region."