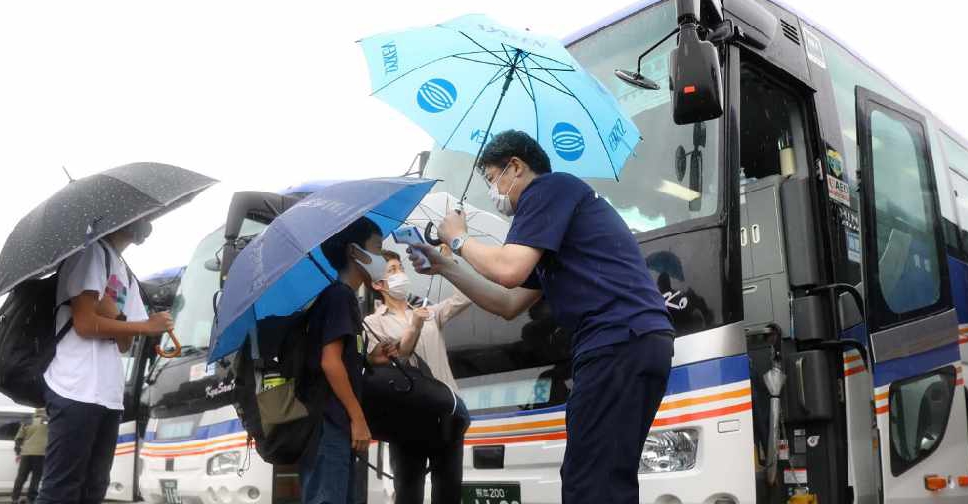 People undergo a temperature check before boarding a bus as an evacuation advice is issued due to the approach of Typhoon Haishen in Hitoyoshi, Kumamoto Prefecture. (AFP)

Authorities urged early evacuation for more than 100,000 households in the southern island prefecture of Okinawa and in Kagoshima, Kumamoto and Nagasaki on Kyushu, Japan's main southern island, according to the Fire and Disaster Management Agency (FDMA).

"This typhoon is headed toward and may potentially make landfall in Kyushu, bringing record rains, winds, waves and high tides," Prime Minister Shinzo Abe said at a meeting with cabinet ministers.

"I am asking that people exercise the utmost caution."

Trees on Yakushima, an island 100 km south of Kagoshima city could be seen shaking violently in strong winds and driving rain, in a post on Twitter.

Elderly citizens wearing face masks due to the coronavirus outbreak were gathering at evacuation centres in Kagoshima and other parts of southern Japan, footage on national broadcaster NHK showed.

The typhoon has cut power to almost 30,000 homes in Kagoshima prefecture and more than 3,000 homes in Okinawa, NHK said.

Two injuries have been reported, according to the FDMA, but authorities were advising the highest levels of caution because of the risk of damage from high winds, flooding, and landslides.

The typhoon is forecast to have atmospheric pressure of 945 hectopascals at its centre, and sustained winds of up to 216 km per hour by Monday, the meteorological agency said.

The typhoon's centre was near Yakushima on Sunday, moving north at 35 kph.

The typhoon was forecast to approach the Goto Islands west of Nagasaki around 3:00 am on Monday (1800 GMT on Sunday) and then move to the Korean peninsula, according to Japan's meteorological agency.

One evacuation centre in Miyazaki reached capacity and stopped accepting evacuees as a precaution against the coronavirus, according to NHK.

Airlines have cancelled more than 500 flights departing from Okinawa and southern Japan, NHK said. Bullet train service in southern and western Japan was suspended, it said.

Japan's coastguard on Saturday suspended its search for crew missing from a cattle ship that capsized in the East China Sea for a second day because of the typhoon.

Typhoon Haishen follows Typhoon Maysak, which smashed into the Korean peninsula on Thursday, leaving at least two dead and thousands temporarily without power.