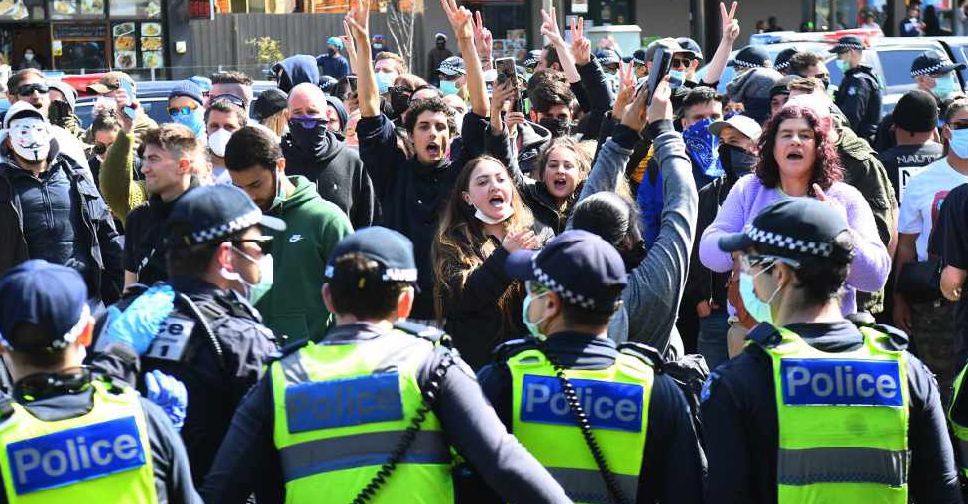 Seventy-four people have been arrested in Australia's Victoria state and another 176 fined after scattered protests against the coronavirus lockdown continued for a second straight day.

A riot squad marched through fruit and vegetable stalls at the city's landmark, the Queen Victoria market, before the scuffling with protesters erupted, television footage showed.

Victoria Police said in a statement that there were between 200 and 250 people involved in the protests, but there were no immediately known injuries to the police.

"It was extremely disappointing to see people not just protesting but putting the lives of other Victorians at risk despite all the warnings," the police said in an e-mailed statement.

The protests came after 14 people were arrested at small dispersed rallies on Saturday and as Victoria is set to ease its lockdown restrictions slightly as of Monday, as the number of new daily coronavirus cases continued to fall in the country's hotspot.

On Sunday, there were 41 new coronavirus cases reported and seven more deaths, showing a steady downward trend from a peak of more than 700 cases in a single day in early August.

Victoria accounts for about 75 per cent of Australia's more than 26,600 COVID-19 cases and more than 90 per cent of the country's total 810 deaths. The state capital, Melbourne, has been under strict lockdown for six weeks.

The city will remain under hard lockdown, but the amount of time people will be able to spend outside will double to two hours per day and the overnight curfew will be shortened by an hour as of Monday.