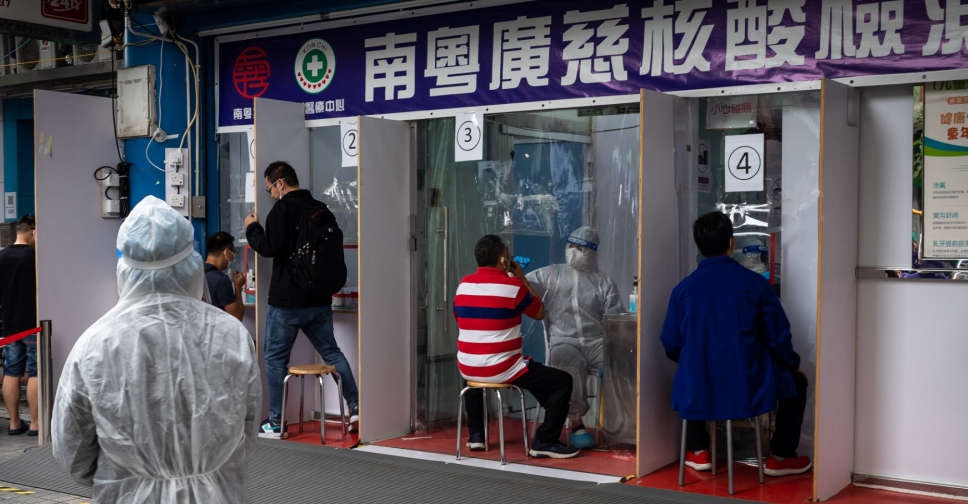 Chinese authorities stepped up COVID-19 lockdowns and other curbs to halt clusters from spreading as China's case load soared to its highest since this year's Shanghai lockdown, with Beijing and Zhengzhou seeing record daily cases.

China reported on Friday 10,535 new locally transmitted cases for November 10, the highest since April 29, when the country's commercial hub, Shanghai, was battling its most serious outbreak.

The nationwide surge, still small by global standards and for a country of 1.4 billion people, has spurred China's top leadership to reaffirm its zero-tolerance strategy for the virus, a policy that President Xi Jinping says is to save lives, especially among China's elderly.

The southern city of Guangzhou, the current epicentre of China's COVID fight, reported 2,824 new local cases for November 10, the fourth day in which infections exceeded 2,000.

Driving the infections were cases in the populous district of Haizhu, which on Friday declared a hard lockdown until Sunday after days of widening restrictions and curbs.

"All residents are required to stay at home," the district government said in a statement. "Only one person in each household is allowed to buy daily necessities on a staggered schedule."

All public transit in the district of 1.8 million people is also suspended, and mandatory PCR tests will be administered to "every household and every individual", according to the statement.

China will not relax its COVID measures but will keep improving them according to the changing epidemic situation and mutation of the virus, a government expert was cited as saying by the national health authority on Friday.

Other major cities such as Beijing, Zhengzhou and Chongqing have tightened measures this week as daily cases renewed all-time highs.

Zhengzhou, the capital of central Henan province, reported 2,988 new local cases, more than doubling from a day earlier, in a widening outbreak that has thrown the local iPhone assembly plant of Apple supplier Foxconn into chaos in recent weeks.

In the southwestern metropolis of Chongqing, local cases have remained in the triple digits all week, with a new high of 783 infections on November 10.

Some Chongqing districts on Friday banned dining in at restaurants and suspended offline classes at schools. Some subway stations were also closed.

Still many parts of the city of nearly 22 million people started to urge residents to undergo PCR tests every day, or be barred entry to public spaces including office blocks, leisure venues and fitness centres.

Organisers said this week that the Beijing Auto Show - a high-profile event that draws global brands - will not be held this year.

The new top leadership body of the ruling Communist Party on Thursday reaffirmed China's zero-COVID policy, saying measures should not be relaxed, with state media reporting that "20 measures" would be further improved, without elaborating.

In its meeting, the Politburo Standing Committee stressed the need to minimise the impact of those measures on the economy.

Strategies that oversimplify containment measures, one-size-fits-all policies, and extra "layers" of measures should be avoided, according to the state media readout of the meeting.

"This meeting further illustrates policymakers have started to focus more on optimising the COVID control policies," according to Goldman Sachs in a note. "We continue to expect policymakers to start preparation work for the gradual relaxation of the "dynamic Zero Covid" policy stance while the actual relaxation might only begin by the second quarter next year."