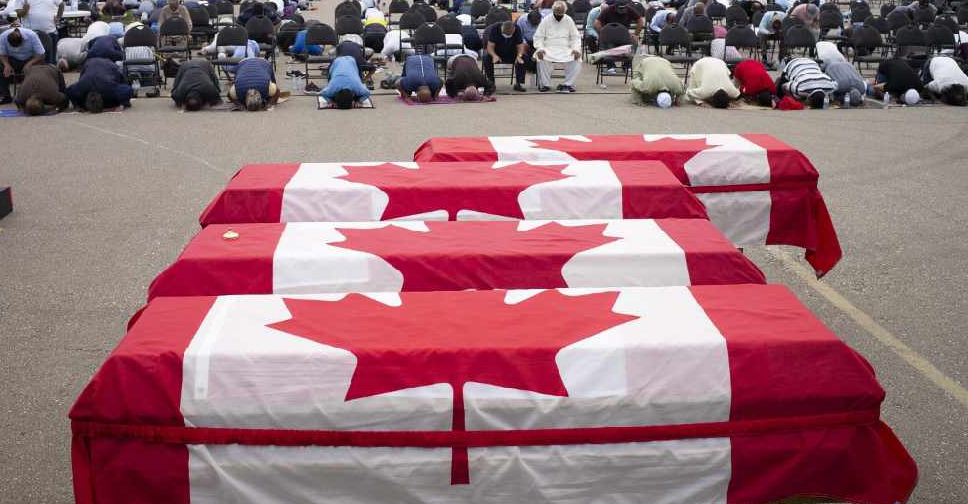 A Canadian man who is accused of deliberately running over a Muslim family with his truck, killing four of them, now faces terrorism charges in addition to those for murder, prosecutors said on Monday.

Nathaniel Veltman, 20, was arrested shortly after the June 6 attack in a parking lot in London, Ontario, a short distance from the city's oldest mosque.

He was wearing what appeared to be body armour and a helmet at the time, police said.

Due to a publication ban, details from a hearing in which Veltman appeared by Zoom on Monday from jail cannot be revealed.

However, provincial and federal prosecutors provided their consent to commence terrorism proceedings against him, alleging that the killings of Salman Afzaal, his wife, their daughter and Afzaal's mother, and attempted killing of the couple's son constituted terrorist activity, according to a statement from London police.

Canadian Deputy Prime Minister Chrystia Freeland reacted to the new charges afterward, saying: "It is really important for us to name it as an act of terror ... and it is important for us identify the terrible threat that white supremacism poses to Canada and to Canadians."

The members of the Afzaal family were out for an evening walk near their home when they were mowed down. The one survivor of the attack - a nine-year-old boy, remains in a hospital with serious injuries.

It was the worst attack against Canadian Muslims since a man gunned down six members of a Quebec City mosque in 2017.

So far, few details have emerged that would shed light on why police say it was a pre-meditated, hate-motivated crime.

Veltman is due in court again on June 21.