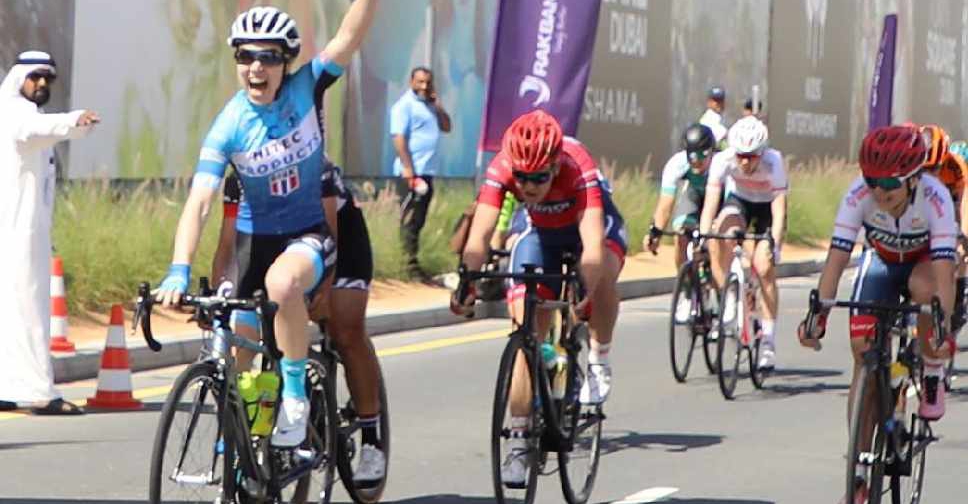 Lucy van der Haar powered her way into the history books by winning the opening stage of the first-ever Dubai Women’s Cycle Tour.

The 99 km stage got underway on Monday with riders from the 17 participating international teams setting off from Dubai Festival City.

The flat course then took the teams out into the desert before looping back to the finish in a thrilling sprint for honours at Nshama Town Square Dubai on Al Qudra Road.

The UAE national team’s Samah Khaled was in it right to the finish, but Van der Haar edged in front for the win. That means the double junior world road race champion will also be wearing the overall general classification leader’s red jersey in tomorrow’s second stage.

“I think everyone was pretty nervous because it was the first race of the season so it was more about seeing how the legs felt,” said the British rider afterwards.

Minsk Cycling Club’s 2012 Olympian Tatsiana Sharakova finished in the second spot with the home team providing plenty of cause for celebration as Khaled secured a podium spot in third.

With that, the Emirati star secured second place overall thanks to her performance during the intermediate sprints.

“What happened is the chain dropped in the last metres of the sprint, but we finished third so that’s very good for us,” said Team UAE coach Ibrahim Al Falamazri.

There were several attempted breakaways during the flat, fast stage, but they were quickly reeled in by the peloton on each occasion, bringing it all down to the bunch sprint at the finish. Van der Haar’s Hitec Products - Birk Sports team set her up perfectly for the win.

In addition to holding the overall lead, Van der Haar also assumed the green sprinters’ jersey while 18-year-old Italian rider Sofia Collinelli (daughter of Olympic gold medallist Andrea Collinelli) was the best young rider and will be wearing the U23 white jersey in tomorrow’s second stage.

That will take riders from the start at Dubai Festival City and out past the famous Nad Al Sheba racecourse. It’s expected to be another speedy one for the sprinters who’ll look to dominate at the Springs Souk.

The first stage of the #DubaiWomensTour under the auspices of Nashama Real Estate ended today and had the participation of 17 teams from different countries. The first stage spanned a distance of 99 km, and the organizing committee awarded the winners at the end of the race. pic.twitter.com/B2kLr52mj7