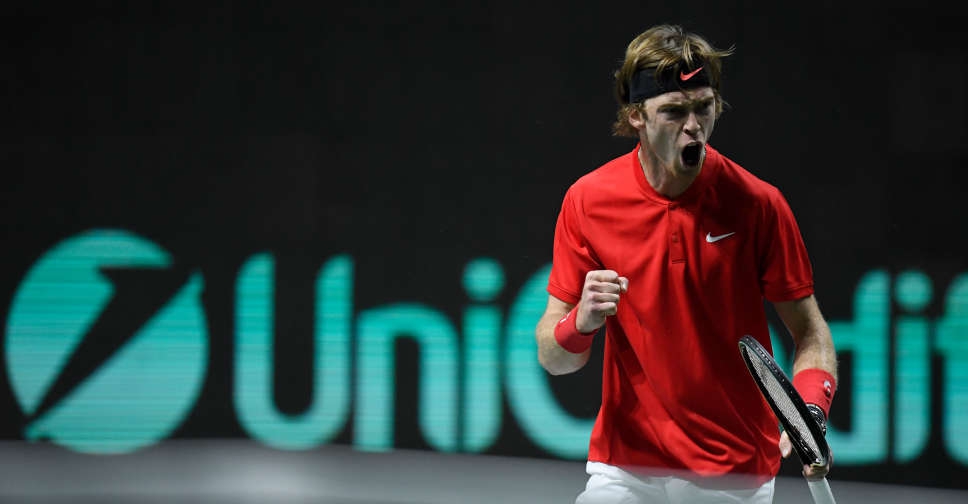 Favourites Russia Tennis Federation opened their Davis Cup Finals campaign with a resounding victory over Ecuador, Britain began with a win against France and Italy eased into the quarter-finals with a win over Colombia.

Novak Djokovic's Serbia were beaten 2-1 by Germany in Group F as the world number one lost a thrilling doubles decider, meaning they must wait until Sunday's final round-robin matches before knowing whether or not they progress.

The Russians beat Ecuador 3-0 in Madrid to move level with holders Spain whom they face on Sunday to decide who will emerge as winners of Group A.

Rublev then teamed up with Aslan Karatsev to beat Gonzalo Escobar and Diego Hidalgo in three sets.

Italy, who beat the US in their opening Group E tie, won both their singles matches against Colombia in Turin with victories for Lorenzo Sonego and Jannik Sinner.

Britain were given a fast start against France in Group C with Dan Evans beating Adrian Mannarino 7-5 6-4.

Cameron Norrie then defeated Arthur Rinderknech 6-2 7-6(8) after coming back from 1-4 down in an absorbing tiebreak.

France won the doubles as Rinderknech, a late replacement for Pierre-Hugues Herbert, joined Nicolas Mahut to beat Joe Salisbury and Neal Skupski 6-1 6-4 -- a win that could prove vital for France who had beaten the Czech Republic.

Britain play the Czechs on Sunday with top spot at stake.

Djokovic was made to work overtime in Serbia's clash with Germany in Innsbruck where fans are not permitted.

After team mate Filip Krajinovic lost 7-6(4) 6-4 to Dominik Koepfer, Djokovic levelled the tie with a comfortable win against Jan-Lennard Struff.

Djokovic returned to court to partner Nikola Cacic but Serbia's hopes of progressing as group winners were dashed as the Serbian pair lost 7-6 3-6 7-6 to Kevin Krawietz and Tim Puetz despite being a break ahead in the decider.

Serbia, who beat Austria 3-0 in their opening Group F tie, must now wait until Germany's clash with Austria on Sunday to learn their fate although they are well placed to progress as one of the best runners-up.

Eighteen teams are competing in six round-robin groups across three cities for places in the last eight which begin on Monday. Six group winners and the two best runners-up advance.

The ties in Innsbruck are being played behind closed doors due to Austria's reintroduction of a COVID-19 lockdown while those in Madrid and Turin have less-than-capacity attendances.

AUSTRALIA ON THE BRINK

Australia beat Hungary 2-1 in Turin but finished their Group D campaign with a 2-4 record having lost 3-0 loss to Croatia in their opening match on Thursday.

Australia went 1-0 down against Hungary when Zsombor Piros, ranked 282nd in the world, claimed the biggest win of his career by beating John Millman 4-6 6-4 6-3.

The doubles pairing of Alex Bolt and John Peers sealed the tie when they beat the Hungarian duo 6-3 6-7(11) 6-3. Hungary face Croatia on Sunday.

In Madrid, Kazakhstan beat Sweden 2-1 in Group B with their doubles pairing of Andrey Golubev and Aleksandr Nedovyesov sealing victory after Swede Elias Ymer and Kazakh Alexander Bublik won their singles rubbers.

Sweden remain top of the group, having beaten Canada 3-0 but Kazakhstan can win it with a victory over Canada on Sunday.