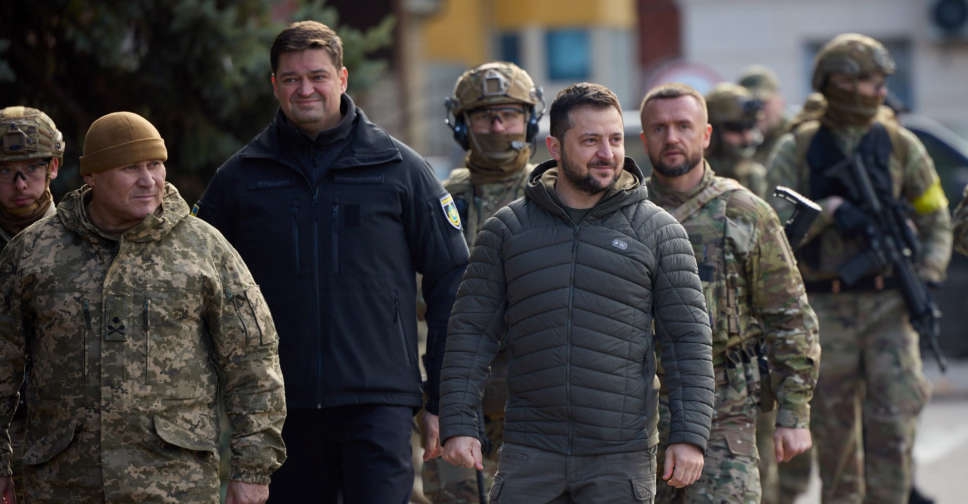 Ukrainian President Volodymyr Zelenskiy on Monday visited the newly recaptured southern city of Kherson, the biggest prize yet won by Ukrainian forces, where he has accused Russian forces of committing war crimes before they fled last week.

"We are moving forward," he told troops standing in formation in front of the administration building in the city's main square, where parents had also turned out with children, some pushing baby strollers, some waving Ukrainian flags or draped in them. "We are ready for peace, peace for all our country."

Zelenskiy thanked NATO and other allies for their ongoing support in the war against Russia and said the delivery of rockets from the United States had made a big difference for Kyiv.

"I'm really happy, you can tell by the reaction of the people, their reaction is not staged," the president said.

Minutes before he arrived, nearby shelling could be heard from the centre of Kherson, and after he finished speaking several more blasts of artillery echoed over the city.

Kherson residents have greeted arriving Ukrainian troops with joy since Friday, when Russia abandoned the only regional capital it had captured since Moscow launched its invasion.

In an overnight televised address, Zelenskiy said investigators had already documented more than 400 war crimes committed by the Russians during their eight-month occupation.

"Bodies of dead civilians and servicemen have been found," he said. "The Russian army left behind the same savagery it did in other regions of the country it entered."

Russia denies its troops intentionally target civilians or have committed atrocities in occupied areas. Mass burial sites have been found in several other parts of Ukraine previously occupied by Russian troops, including some with civilian bodies showing signs of torture, which Kyiv blames on Moscow.

The United States will announce new sanctions on Monday against 14 individuals and 28 entities that have worked to procure military technologies for Russia's war in Ukraine, US Treasury Secretary Janet Yellen said.

Russia has managed to procure drones from Iran that have been used to attack cities and power infrastructure in Ukraine.

Russian President Vladimir Putin is not attending the summit, instead sending his foreign minister, Sergei Lavrov, who became subject to speculation about his health after reports he was taken to an Indonesian hospital.

The governor of Bali, Wayan Koster, told Reuters Lavrov, 72, had gone to a hospital for a "check-up" after arriving for the summit, but was in good health. Russia released a video showing Lavrov sitting outside in shorts and a T-shirt, denying he was ill and blaming the health reports on Western media.

Ukraine's recapture of Kherson marked Moscow's third major retreat of the war and the first to involve yielding such a large occupied city.

Russian forces who retreated across the Dnipro River continued to fire on Ukrainian troops and newly retaken settlements from new positions on the opposite bank, the Ukraine Armed Forces' southern command said on Monday.

Regional governor Yaroslav Yanushevych said a curfew would be maintained from 5:00 pm to 8:00 am and people would be banned from leaving or entering the city for a few days for security.

"The enemy mined all critical infrastructure," he said.

Zelenskiy also warned Kherson residents about Russian mines. "I am asking you please not to forget that the situation in Kherson region remains very dangerous," he said.

Ukraine's defence ministry said it had recaptured 179 settlements and 4,500 square km along the Dnipro River since the beginning of the week.

"The enemy does not stop shelling settlements and the positions of our units along the front line ... It continues to strike critical infrastructure and civilian homes," it said.