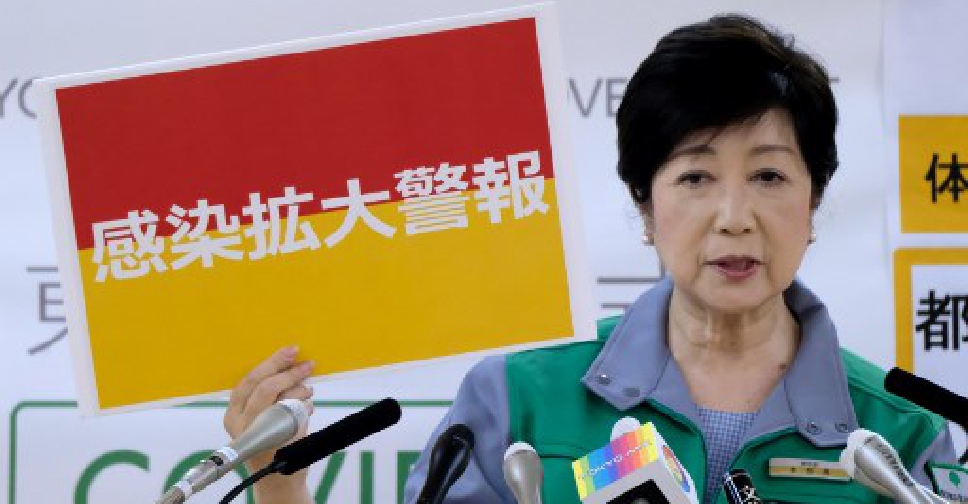 Tokyo raised its coronavirus alert to the highest "red" level on Wednesday, alarmed by a recent spike in daily new cases to record highs.

Governor Yuriko Koike has described the situation in the Japanese capital as "rather severe".

The resurgence of the virus in Tokyo could add to the growing pressure on policymakers to shore up the world's No.3 economy, which analysts say is set to shrink at its fastest pace in decades this fiscal year due to the pandemic.

"We are in a situation where we should issue warnings to citizens and businesses," Koike told a press conference, urging residents to refrain from unnecessary travel.

The infection rate in Tokyo is at stage "red", the highest of four levels in the metropolis' system, Koike said, citing the analysis by health experts who cautioned earlier in the day that infections were going up quite a bit and "exceeding peaks".

She also pledged to step up testing for the virus by utilising equipment at universities.

"My understanding is that we're in a rather severe situation now," Koike said.

Infections among young people and asymptomatic cases are rising in Tokyo, health experts have noted.

Fearing a second wave of infections spreading from the capital, local municipalities, opposition lawmakers and social media users have asked the central government to suspend a major "Go To" travel aid campaign that aims to boost domestic tourism.

Leaders of some rural towns say that driven by the campaign, travel in and out of high-risk regions like Tokyo may lead to widespread community transmissions.

There were reports in local media of Tokyo residents being asked to stay away from parents and relatives living in rural towns that have reported fewer coronavirus cases.

The pandemic in Japan will turn into a "man-made" disaster should the travel programme go ahead, Soichiro Miyashita, mayor of the city of Mutsu in Aomori Prefecture, has warned.

But Japan's economy minister, Yasutoshi Nishimura, said the government will cautiously proceed with the campaign, which includes discounts for shopping and food.

"Obviously we will consider the thoughts of many of our people, while monitoring the situation ahead," Nishimura, who leads the government's coronavirus policy, told parliament.

The programme, among the government's top initiatives to stimulate economic activity and set to start this month, has also come under fire over costs as it subcontracts back-office work to a private contractor.

Koike urged the government to reconsider the timing for the campaign at the press conference.

Infections are rising in other parts of Japan too, with Osaka prefecture in the west reporting 61 new cases on Wednesday, broadcaster NHK said, marking the highest number of daily cases there since April 20.

In Tokyo, daily virus cases exceeded 200 in four of the past seven days, touching a record of 243 last Friday as testing among nightclub workers in its red-light districts showed rising infections among people in their 20s and 30s.

Health experts noted Tokyo hospitals were getting crowded as the number of patients doubled from the previous week.

Tokyo's latest cluster has been traced to a theatre with at least 37 cases in Shinjuku, a busy entertainment area and home to one of Asia's biggest red-light districts which has been the centre of a recent spike in infections.