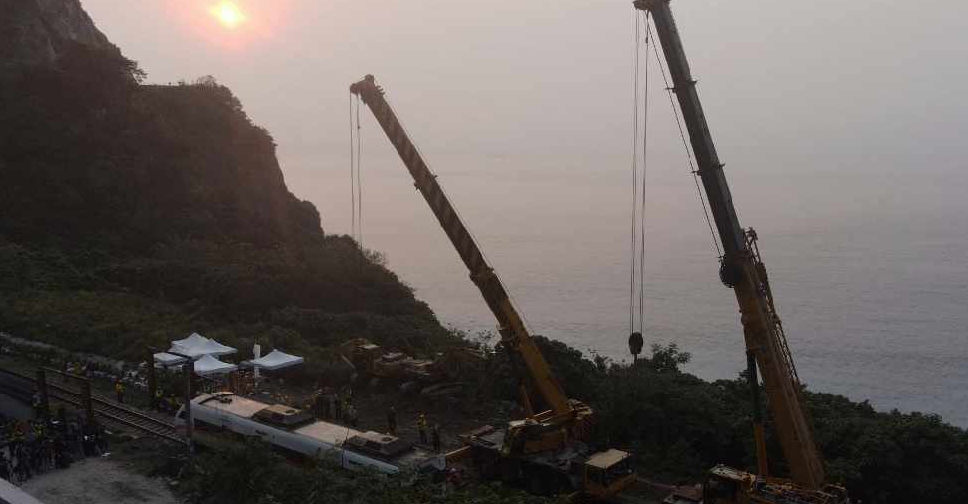 Taiwanese rescuers were trying on Monday to retrieve the last body of a passenger from wreckage of a deadly train crash last week.

Fifty people have been confirmed dead after a packed express train carrying almost 500 passengers and crew slammed into a truck near the eastern city of Hualien on Friday, causing it to derail and the front end to crumple. It was the island's worst rail accident in seven decades.

The truck had slid down a sloping road from a building site onto the tracks just outside a tunnel. Officials suspect the truck's brakes were not properly applied and are investigating the manager of the site.

Hualien's fire department said that the remaining body was trapped under a 15-tonne train bogie. It did not provide details on the identity of the passenger.

"The rescue is difficult, and we are currently discussing how to overcome these difficulties, so the time it takes may be delayed," the department said.

Transport Minister Lin Chia-lung said late on Sunday that he took responsibility for the accident and would step down once initial rescue and recovery work was complete.

The victims include two Americans and one French national.

Taiwan's government has promised compensation and said it would do everything it could to help survivors and their relatives, including coordinating public donations.

The damaged section of the track is not expected to reopen until April 20 at the earliest, though rail traffic continues on a parallel track that runs through another tunnel and was not affected by the accident.

The crash occurred at the start of a long weekend for the traditional Tomb Sweeping Day, when people return home to tend to family graves.

Taiwan has no domestic travel curbs, as the COVID-19 pandemic is well under control, with only 40 active cases in hospitals.