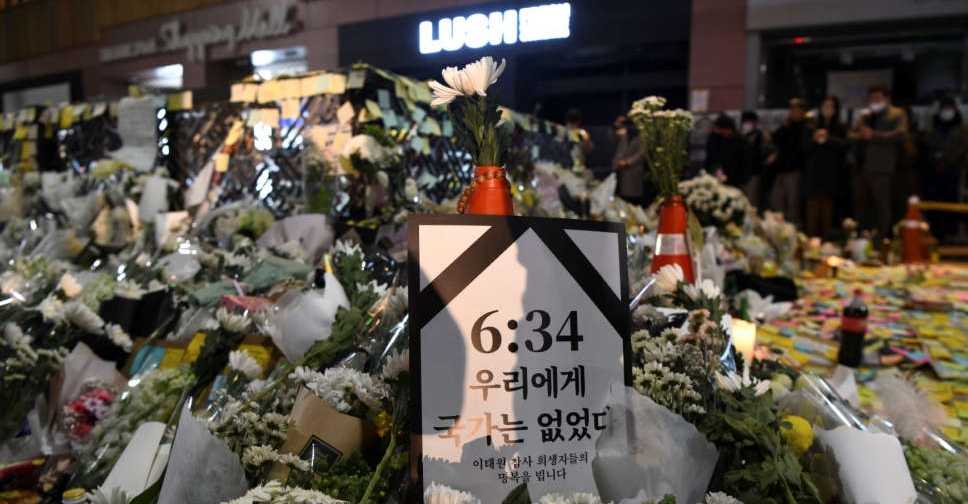 South Korean President Yoon Suk-yeol apologised on Monday for the deadly Halloween crush in Seoul, pledging to hold to account any officials found to be responsible for sloppy responses and to reform police and safety management systems.

The October 29 crush killed 156 people, mostly in their twenties and thirties, and injured another 197 when revellers flooded the narrow alleyways of the popular nightlife district of Itaewon to celebrate the first COVID-19 curbs-free Halloween festivities in three years.

Yoon offered the apology during a meeting to review safety rules, as the country continues to mourn the crush victims. An investigation is under way into authorities' responses to the accident.

"I do not dare to compare myself to the parents who lost their sons and daughters, but as the president who ought to protect the people's lives and safety, I am heartbroken," he said.

"I am sorry and apologetic to the bereaved families who are suffering an unspeakable tragedy, and to the people who share the pain and sorrow."

Police have faced stringent public criticism and scrutiny over its responses during the tragedy, having dispatched just 137 officers to the area despite estimating in advance as many as 100,000 people would gather.

Last week, transcripts of several emergency calls made from the hours leading up to the accident showed that people had warned of a potential crush and urged interventions.

Yoon initially ascribed the authorities' poor handling to flaws in the country's crowd management and safety regulations. Following the reports of the call transcripts, however, he sharply rebuked the police and apologised to the victims and wider public.

At Monday's safety meeting, he vowed to overhaul the national safety management system, carry out a thorough investigation and bring those responsible for failings to account.

"In particular, extensive reform is needed in the police work, which is essential to preparing for danger and preventing accidents, in order to protect the safety of the people," Yoon said.

National Police Commissioner General Yoon Hee-keun told parliament on Monday that more officers were dispatched than compared to pre-COVID-19 years and the 137 would have been sufficient to manage crowds of similar scale in general, but authorities could not expect that people would be concentrated into alleyways.

Opposition lawmakers demand the police chief and the interior minister be sacked. Yoon has rejected such calls.