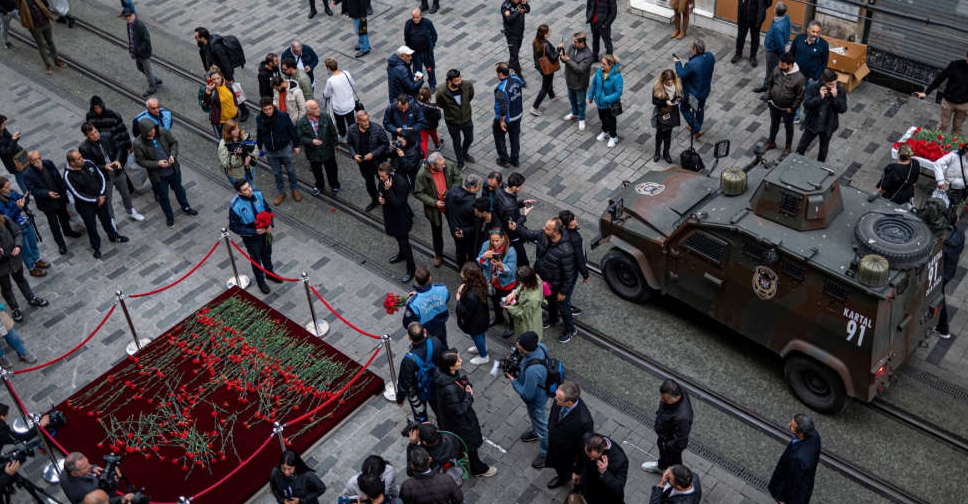 Turkey blamed Kurdish groups on Monday for an explosion that killed six people on a busy Istanbul shopping street, and police detained a Syrian woman suspected of having planted the bomb among a sweep of 47 arrests.

Istanbul police named the suspected bomber as Ahlam Albashir, a Syrian national, who was detained in an overnight raid in the city's Kucukcekmece district.

Interior Minister Suleyman Soylu said the Kurdistan Workers Party (PKK) and the Syrian Kurdish YPG militia were responsible for the blast on Istiklal Avenue on Sunday, an incident that recalled similar attacks in years past.

Soylu said the order was given in Kobani, a city in northern Syria, where Turkish forces have carried out operations against the YPG in recent years.

Ankara says the YPG is a wing of the PKK. The United States has supported the YPG in the conflict in Syria, stoking friction between NATO allies.

Albashir, with curly hair and in a purple jumper with the words 'New York' on it, was shown handcuffed, state broadcaster TRT Haber footage showed.

According to Istanbul police, Albashir said during questioning that she was trained by Kurdish groups and entered Turkey through Afrin, another northern Syrian town.

Earlier television news reports showed images of a person, who appeared to be a woman, leaving a package below a raised flower bed in the middle of the avenue just before the attack.

A Turkish official said the possibility of the IS group being responsible for the attack was "not entirely disregarded".

ECHOES OF PAST ATTACKS

Six Turkish citizens, two members each of three families, were killed in the attack. No group has claimed responsibility.

Of those wounded, two of the five people being treated in intensive care were in critical condition, Health Minister Fahrettin Koca said. They were among the 26 wounded still in hospital, while 55 people had been discharged.

The attack sparked concerns that more such incidents could occur ahead of elections set for June 2023, which polls show President Tayyip Erdogan could lose after two decades in power.