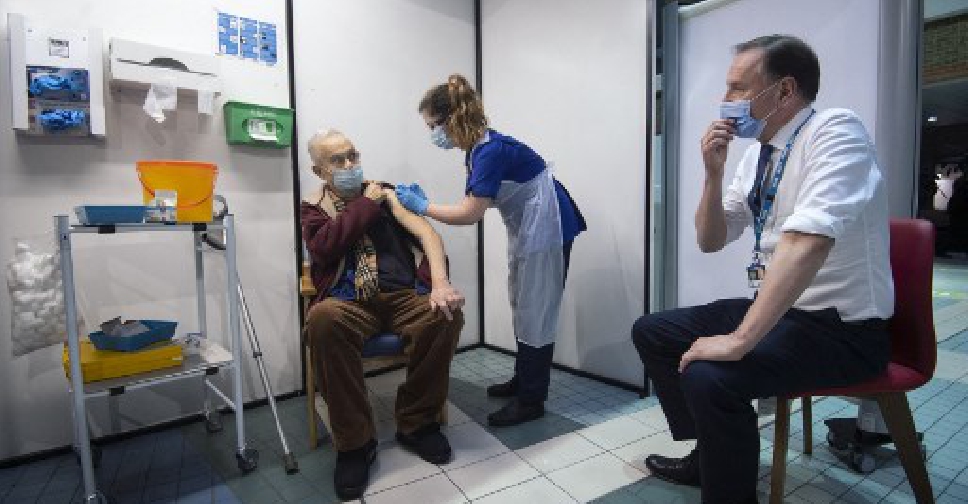 Simon Stevens (R), Chief Executive of the NHS, watches as a nurse (C) administers a dose of the Pfizer-BioNTech Covid-19 vaccine to a citizen at Guy's Hospital in London. Victoria Jones / POOL / AFP

More than 70 British lawmakers have signalled their opposition to the introduction of so-called vaccine passports that the government is considering bringing in to help to open the economy as it starts lifting COVID-19 lockdown restrictions.

The government is reviewing the idea of asking people to show proof of a COVID-19 vaccination to access crowded spaces such as pubs or sports events, with Prime Minister Boris Johnson having already said that a certificate is likely to be needed for international travel.

The Daily Telegraph newspaper reported on Saturday that trials of COVID passports would begin within weeks during pilots at major sports events and possibly a music awards ceremony in the next two months to assess their impact.

On Friday Johnson said that a combination of immunity factors - if people have had the disease, a vaccination or had a COVID-19 test - would give businesses confidence.

"So those three things working together will, I think, be useful for us as we as we go forward," Johnson said.

But there has been mounting concern from some in his own Conservative Party, as well as opposition lawmakers and civil rights groups, about the prospect of vaccine certificates.

"We oppose the divisive and discriminatory use of COVID status certification to deny individuals access to general services, businesses or jobs," said a statement signed by a group of more than 70 lawmakers from across the political spectrum.

Under the government's planned "roadmap" out of the pandemic, pubs will be allowed to serve people outdoors later this month, with a further easing of restrictions in mid-May before all measures are lifted near the end of June.

Johnson suggested last month that some pubs might require customers to produce vaccine certificates. Culture minister Oliver Dowden, meanwhile, has said that such certificates could help get more people into theatres.

No decision has yet been made and Johnson has instructed senior minister Michael Gove to review the possible role of certificates, saying there are deep and complex ethical issues to explore. Gove is due to report back shortly.

More than 31 million Britons have already received their first vaccine dose in the fastest inoculation programme in Europe.