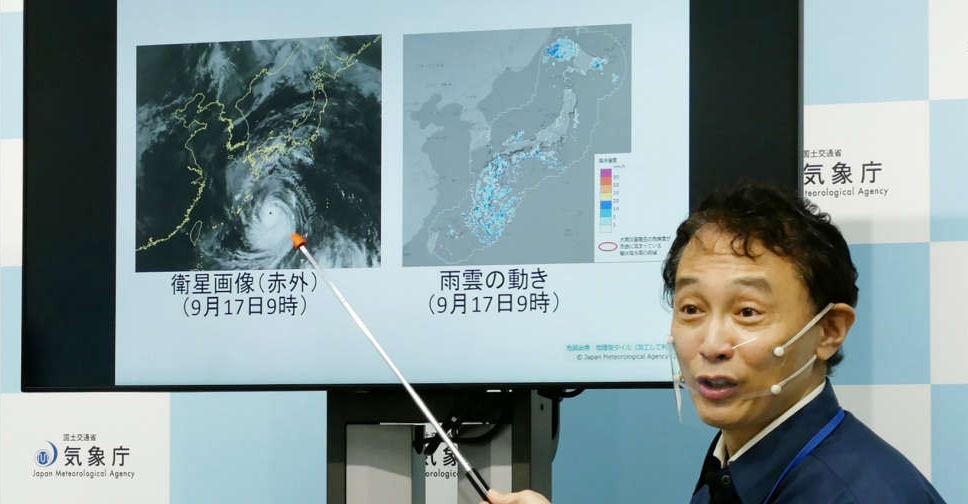 Residents are urged to evacuate parts of the southern island of Kyushu, ahead of a large and powerful typhoon expected to bring up to half a metre (20 inches) of rain when it makes landfall on Sunday.

The Japan Meteorological Agency issued the warning on Saturday.

Nanmadol, classified as a super typhoon by the US Navy's Joint Typhoon Warning Center, has the potential to be the most destructive tropical storm to strike Japan in decades.

Japan's weather agency said it might issue a "special warning" for Kagoshima prefecture and other parts of Kyushu, Japan's southernmost main island, as early as Saturday evening with the possibility of high waves and heavy rains in the regions. It would be the first such alert for any prefecture north of the Okinawa island chain, domestic media reported.

"Unprecedented" storms and rainfall could strike the area, JMA official Ryuta Kurora said at a televised press conference, urging residents to evacuate before it gets dark.

Southern Kyushu could receive 500 millimetres of rain on Sunday, while the central Tokai region could see 300 millimetres, the agency forecast.

Kyushu Railway Co 9142.T began halting some train lines on Saturday ahead of wider suspensions on Sunday. As a result, dozens of weekend flights in the southern region have been cancelled, broadcaster NHK reported.

Nanmadol, the 14th typhoon of the season, was near Japan's southern Minami-Daito Island, heading northwest at 20 km (12 miles) per hour on Saturday afternoon. Winds at the centre of the storm are blowing at 198 km per hour (123 miles per hour), gusting up to 270 kph, according to the JMA.

The storm, equivalent in strength to a "class 5" hurricane in the Atlantic Ocean, is forecast to curve east and pass over Tokyo on Tuesday before moving out to sea by Wednesday.

As the storm approached, domestic broadcasters aired footage of strong winds and rain already lashing down on Japan's southern island chain of Okinawa.