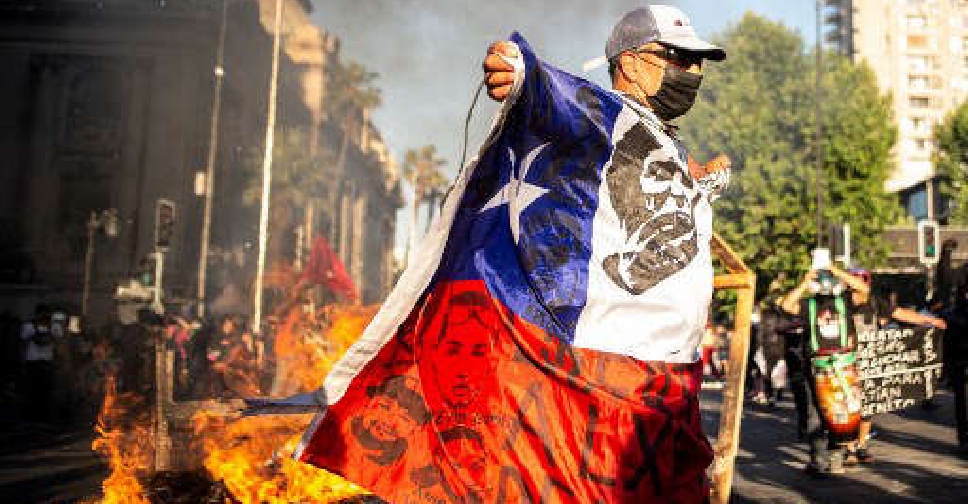 For many Chileans, Plaza Baquedano, a broad rotary in central Santiago that for decades served as a centre of social protest, has become a powerful symbol of hope.

For two years, city residents have regularly gathered to protest pensions that are too low, public transit fees that are too high and, more generally, an old-guard political class that just does not get it.

The statue of a nineteenth-century general that sat at the plaza's centre has been removed, and its plinth is now covered in left-wing political literature.

Most credit the protests - known collectively as the "estallido social" or "social outbreak" - for bringing about an ongoing rewrite of the nation's Pinochet-era constitution.

The "estallido" has also helped propel the candidacy of 35-year-old leftist Gabriel Boric, a relative newcomer who has become a serious contender in this Sunday's presidential election.

But not everyone is so enthralled.

Among the detractors is Ramon Zambrano, a doorman at a nearby apartment building.

"You can protest, but peacefully. They're making a mess, burning cars, burning the metro. What are they doing?" he asks while pointing out the damage done to the now graffiti-covered building where he works.

In a sense, the situation around Plaza Baquedano represents the central paradox of the election here. While Chile's Left gained significant traction via dozens of massive marches that began in 2019, two years of sometimes-violent protests have made many voters wary.

That - combined with a widespread perception among Chileans that crime is on the rise - has created an opportunity for the Right to gain ground by hammering home a law-and-order message.

While Boric, who rose to fame heading student protests in 2011, had been leading for most of 2021, José Antonio Kast, an ultra-right-wing former congressman who draws comparisons to Donald Trump and Brazilian President Jair Bolsonaro, has risen in the polls dramatically in recent weeks.

Most recent polls show Kast drawing the largest vote share on Sunday. However, a November 6 survey by consultancy Activa Research has Kast narrowly winning a likely runoff in December.

For Kenneth Bunker, director of political consultancy Tresquintos, a particularly violent round of protests in late October helped boost the Right.

A series of recent confrontations in the southern Araucania and Bio Bio provinces - where police and indigenous separatist groups have long feuded - has also played into Kast's hands.

"I think there is a vital part of the country that's tired; they don't want any more of this," said Gonzalo Cordero, a political consultant and columnist for the national La Tercera newspaper.

Boric's supporters point out that almost 80% of Chileans, many fed up with the nation's ultra-free-market economic model, voted last year to rewrite the nation's constitution. A conservative like Kast would do little to quell discontent, they argue.

"I think that if Kast is elected, there will be an 'estallido 2.0'," said Pedro Muñoz, an elected member of the body rewriting Chile's constitution.

Still, the Kast campaign is leaning into the law-and-order message, as are his supporters.

At his campaign's closing event on Thursday night, he repeatedly pledged to crack down on crime. The strongest applause came when he spoke in favour of police officers, many of whom have been accused by the public and prosecutors of using violence against protestors.

Several supporters insisted without evidence in interviews that the "estallido" was the product of foreign provocateurs, such as the Venezuelan or Cuban governments.

Banners favouring Trump were common, as were anti-crime banners such as "Orden con Kast" or "Order with Kast."

Boric, for his part, is leaning in, too. While for Kast's supporters, the protests are a symptom of decline and disorder, for Boric, they are a sign the previous order was not worth saving.

"We're going to do our politics from the streets," Boric said at his own campaign event on Thursday night.