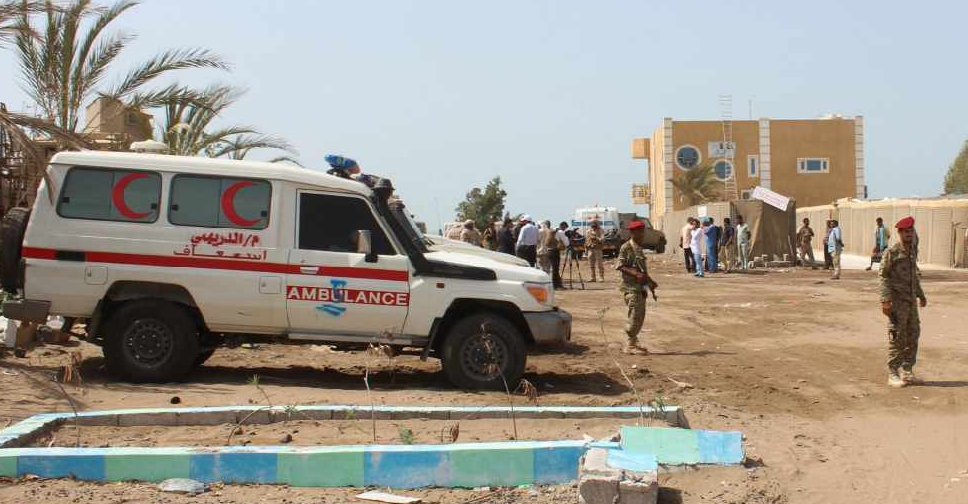 Coalition forces backed by Saudi Arabia and the UAE gather outside a hospital in Yemen's port city of Hodeida on January 22, 2019. [SALEH AL-OBEIDI / AFP]

The UAE and Saudi Arabia have reaffirmed their support for political, military and relief efforts in Yemen.

In a joint statement, the two countries said they will continue to work together to help the people of Yemen and preserve its territorial integrity, under the leadership of Yemen's legitimate president.

They have also stressed their commitment to tackling the Houthi militia and other terrorist groups.

The joint statement came after the Arab Coalition said it had intercepted drones and ballistic missiles fired by the Houthis targeting Saudi territory.

Here's the statement in full:

"The Governments of the United Arab Emirates and the Kingdom of Saudi Arabia have followed with great concern the political and military developments of ensuing events in Yemen's interim capital (Aden) on the 27th of July, 2019, and the subsequent events in the governorates of Abyan and Shabwa. This came at a time when the Yemeni government and warring parties welcomed an immediate ceasefire and handed over the civilian facilities in Aden to the Legitimate Government under the supervision of the Coalition Forces and welcomed the Kingdom's call for dialogue in Jeddah.

"In response, the governments of both the United Arab Emirates and Saudi Arabia, in line with their responsibilities as members of the Coalition supporting the Legitimate Government to save Yemen and its people from the Iranian-backed Houthi militia coup, reaffirm the continuation of all their political, military, relief, and development efforts with the participation of coalition countries that rose to support the Yemeni people.

"The governments of both countries express their rejection and condemnation of the accusations and defamation campaigns targeting the UAE due to those events; reminding everyone of the sacrifices made by the Coalition Forces in Yemen, motivated by sincere fraternal and neighbourly ties, the preservation of security in the region, and the prosperity of its people and their common destiny. Nonetheless, they affirm their keenness and full endeavour to preserve the Yemeni nation and the interests, security, stability, independence and territorial integrity of the Yemeni people under the leadership of the legitimate president of Yemen, as well as to counter the coup of the Iranian-backed Houthi terrorist militia and other terrorist organisations.

"The governments of the two countries also stress the need for full commitment to cooperate with the joint committee set up by the Coalition leadership in order to disengage and redeploy forces within the framework of the military effort of the Coalition Forces, and urges to engage in a speedy dialogue in Jeddah, which Saudi Arabia has called for to address the causes and repercussions of events taking place in some southern provinces."