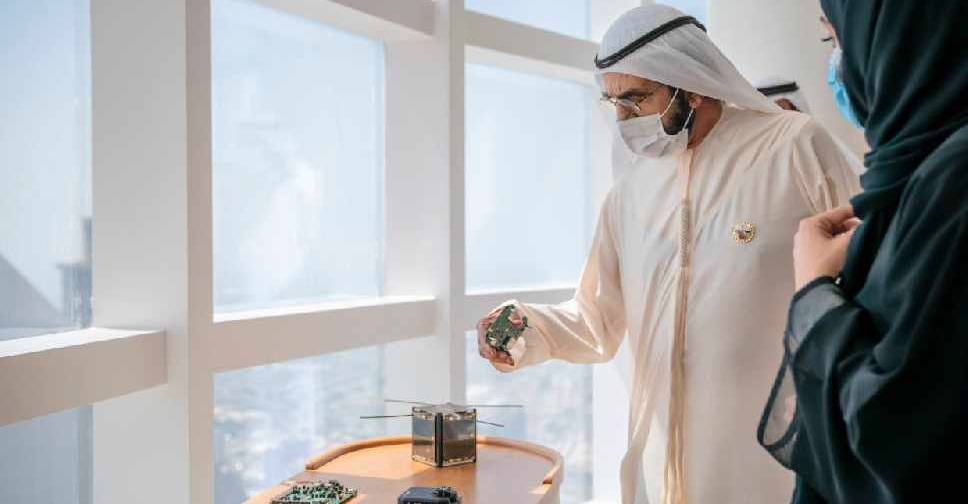 His Highness Sheikh Mohammed bin Rashid Al Maktoum, Vice President and Prime Minister of the UAE, Ruler of Dubai has met with the team from Marshal Intech, who are working to develop a group of satellites that will be launched in December.

His Highness was briefed about the preparations currently underway for Ghalib, the first of the satellites, which has spent the last three years in development.

The team members, led by Omar bin Ghalib, Director of Marshal Intech, a subsidiary of the UAE Bin Ghalib Group, explained the stages and mechanisms of developing satellites, tracking devices, ground station readiness, models of electronic boards, transmitters and broadcasters, and the satellite equipment that the team is developing, with the aim of using them to track wildlife in the UAE to assist in monitoring animals and conservation.

When it comes to the space programme, His Highness said, "Providing support to Emirati entrepreneurs and encouraging young people to enter new economic fields represents a fundamental approach in the framework of establishing our position in the future industries sector.

His Highness also stated that the private sector in the UAE has become a key partner in supporting the national space strategy.

He also noted, "Space industries have become a major nerve in the UAE's economic system, in sync with the goals of the National Space Strategy, launched by the government in 2019''.

The UAE hosts more than 50 companies, institutions and establishments specialised in the space sector, including international companies and emerging companies.

The size of the UAE's investments in the space industries sector is estimated at more than AED22 billion.

One of the most important sustainable space projects in the UAE is building an advanced satellite system, among which is "Khalifa Sat", which is the first Arab-Emirati satellite designed and built entirely by Emirati national cadres.

In July, the UAE successfully launched the ''Hope Probe'', the Arab world's first mission to Mars.

The UAE also plans to send an unmanned spacecraft to the moon in 2024 as part of the Emirates Lunar Mission, the first Arab mission to the Moon.