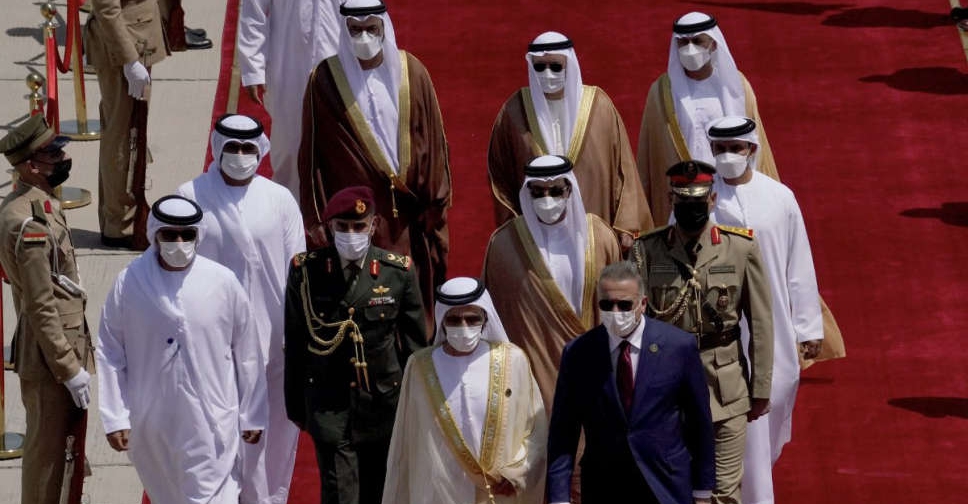 His Highness Sheikh Mohammed bin Rashid Al Maktoum, Vice President and Prime Minister of the UAE and Ruler of Dubai is leading a high level UAE delegation participating in the Baghdad Conference for Cooperation and Partnership.

The UAE leader was welcomed upon arrival at Baghdad International Airport by Mustafa Al-Kadhimi, Prime Minister of Iraq, and a group of Iraqi ministers and senior officials.

.@HHShkMohd arrives in the Iraqi capital to take part in the Baghdad Conference for Cooperation and Partnership, and Iraqi Prime Minister Mustafa Al-Kadhimi is among the first to receive His Highness. pic.twitter.com/G78mEED137

Saturday's meeting brought together leaders and representatives from a number of countries.

Macron and Kadhimi want to foster dialogue, including on security, according to a French presidential source quoted by Reuters. "The aim is to initiate something here and to continue (it) after this conference," the source said.

In the presence of @HHShkMohd, the Baghdad Conference for Cooperation and Partnership kicks off in the Iraqi capital. pic.twitter.com/eZIdboiZ4b

The Conference discussed a number of security, political and economic dossiers, in addition to emphasising support for the Iraqi government and the fight against terrorism.

In a speech during the opening of the Baghdad Summit for Cooperation and Partnership, Iraqi Prime Minister, Mustafa Al-Kadhimi said, "Terrorism represents a common threat to all, and Iraq refuses to use its territory as an arena of conflict.

He added that Baghdad Conference embodies Iraq's vision for cooperation, saying that there will be no foothold for terrorism in Iraq, no return to undemocratic routes and no absurd wars.

What unites peoples is more than what separates them.

His Highness Sheikh Mohammed bin Rashid Al Maktoum, Vice President and Prime Minister of the UAE and Ruler of Dubai is meeting the GCC's leaders on the sidelines of the summit.

"Prince Tamim is a brother and a friend, the Qatari people are relatives...the Gulf destiny is one, it was and will remain...May God protect our people and perpetuate their security, stability and prosperity", His Highness wrote on his official Twitter account after the meeting.

The two leaders discussed the strengthening of bilateral relations and plans to achieve the common interests of both countries.

.@HHShkMohd meets with Sheikh Sabah Al-Khaled Al-Sabah, Prime Minister of Kuwait, on the sidelines of the Baghdad Conference for Cooperation and Partnership held today in the Iraqi capital. pic.twitter.com/elM7bI0TMN

In a Twitter post after the meeting, Sheikh Mohammed wished Amir-Abdollahian success in his new duties, hoping he would develop positive relations with neighboring countries and consolidate relations "based on the principles of wisdom and interests of the people".