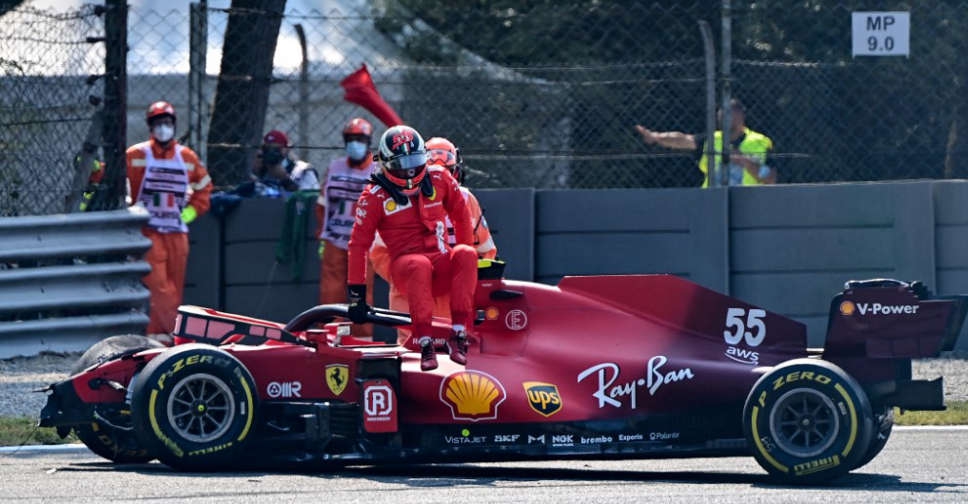 Ferrari's Spanish driver Carlos Sainz Jr gets out of his car after a crash during the second practice at the Autodromo Nazionale circuit in Monza on September 11, 2021, ahead of the Italian F1. MIGUEL MEDINA / AFP

Carlos Sainz crashed his Ferrari heavily in final practice for the team's home Italian Grand Prix on Saturday as seven-times Formula One world champion Lewis Hamilton was fastest for Mercedes.

The Spaniard halted the session when he smashed head-on into the barriers at the Ascari chicane with just over half an hour remaining.

Sainz, who also crashed in Saturday practice at last weekend's Dutch Grand Prix, was taken to the medical centre and the session resumed with some 20 minutes left.

The stricken Ferrari was returned to the pitlane, with the team saying mechanics were working flat out to get it ready for the afternoon's sprint which sets the grid for Sunday's grand prix at the fastest circuit on the calendar.

Sainz was given preliminary clearance to race but will have another check before the sprint.

He had qualified seventh fastest on Friday with the sprint awarding points to the top three. The experimental format is being tried out for the second time after a debut at Silverstone in July.

Team mate Charles Leclerc ended his session a few minutes early, telling the team over the radio: "Guys, I need to box. I cannot explain it here."

A team spokeswoman said the Monegasque "was feeling slightly unwell".

Hamilton's time of one minute 23.246 was 0.222 quicker than Finnish team mate Valtteri Bottas, who qualified fastest on Friday.

Mercedes have indicated they will tell Bottas to let Hamilton pass in the sprint race, given the championship situation, if circumstances allow.

Verstappen is three points clear of the Briton after 13 races and Bottas will start at the back of the grid on Sunday after an engine change on Friday triggered an automatic penalty.