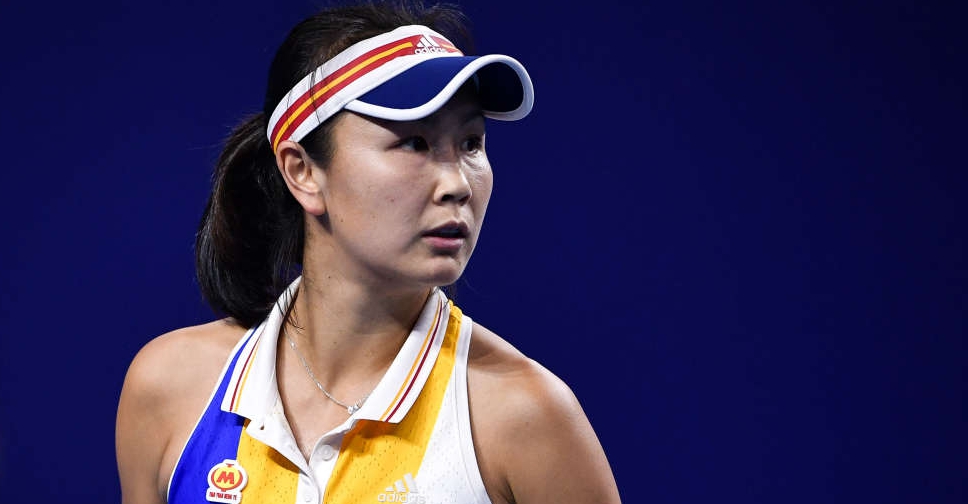 Chinese tennis star Peng Shuai, whose whereabouts have been a matter of international concern for weeks, attended a tennis tournament in Beijing on Sunday, according to official photos published by the tournament organised by China Open.

Peng can be seen among guests at the Fila Kids Junior Tennis Challenger Finals, dressed in a dark blue jacket and white trousers, according to the pictures published on the event's official WeChat page.

The former doubles world number one had not been seen or heard from publicly since she said on Chinese social media on November 2 that former vice-premier Zhang Gaoli had coerced her into "an on-off consensual relationship".

Neither Zhang nor the Chinese government have commented on her allegation. Peng's social media post was quickly deleted and the topic has been blocked from discussion on China's heavily censored internet.

World tennis bodies have expressed concern, with the Women's Tennis Association (WTA) threatening to pull tournaments out of China. The United States and Britain have called for evidence of Peng's whereabouts and safety.

The photographs and video footage of Peng that emerged on Sunday remain "insufficient" and do not address the WTA's concerns, a spokesperson for the group told Reuters by email.

The US and British embassies in Beijing did not immediately respond to Reuters requests for comment on Peng's Sunday appearance in the Chinese capital.

Peng also visited a popular restaurant in downtown Beijing on Saturday night. Hu Xijin, editor-in-chief of the state-backed Global Times posted a video of the outing, which a restaurant manager confirmed to Reuters on Sunday.

Seven people including Peng were at the Sichuanese restaurant, said the manager, Zhou Hongwei, adding that they ate in a private room and were joined by the restaurant's owner.

"It was crowded at the restaurant as usual," Zhou said, showing a bill that included noodles and bamboo shoots. "They didn't have much. I think they mostly chatted."

The issue of Peng's safety and whereabouts has emerged as China prepares to host the Winter Olympics in Beijing in February amid calls from global rights groups and others for a boycott over its human rights record.

Searches for Peng's name on popular Chinese microblog Weibo continued to yield no results on Sunday, and discussions about her initial accusations have been blocked on social media.

Chinese state media outlet CGTN on Wednesday released what it said was an email Peng had sent to WTA Chairman and CEO Steve Simon, in which she said the allegation of assault was untrue. Twitter is blocked in China.

Hu of the Global Times also tweeted Peng's Sunday appearance at the tennis tournament. The Global Times is published by the People's Daily, the official newspaper of China's ruling Communist Party.

Videos posted by Hu and a Global Times reporter showed her smiling, waving and signing autographs for children.

The 37-second video Hu posted showed Peng standing in a row of people being introduced to the audience. An announcer says, "Two-time Grand Slam champion, former world number one in woman's doubles - Peng Shuai!" She waves, smiling, and acknowledges applause.

Peng Shuai showed up at the opening ceremony of a teenager tennis match final in Beijing on Sunday morning. Global Times photo reporter Cui Meng captured her at scene. pic.twitter.com/7wlBcTMgGy

Global Times chief reporter Chen Qingqing posted a 31-second video, apparently from the same event. Peng appears to sign oversized tennis balls for children and pose with them for pictures.

Video shot by my colleague Cui Meng at the National Tennis Center showing Peng Shuai signing signature on large-sized tennis balls at the opening ceremony of Junior Tennis Challenger Final, a way of inspiring more kids to play tennis as hobby and may also as career pic.twitter.com/Sbyj5V5a7Y

Reuters was not able to independently verify the authenticity of the images, which were both credited to Global Times staffer Cui Meng.