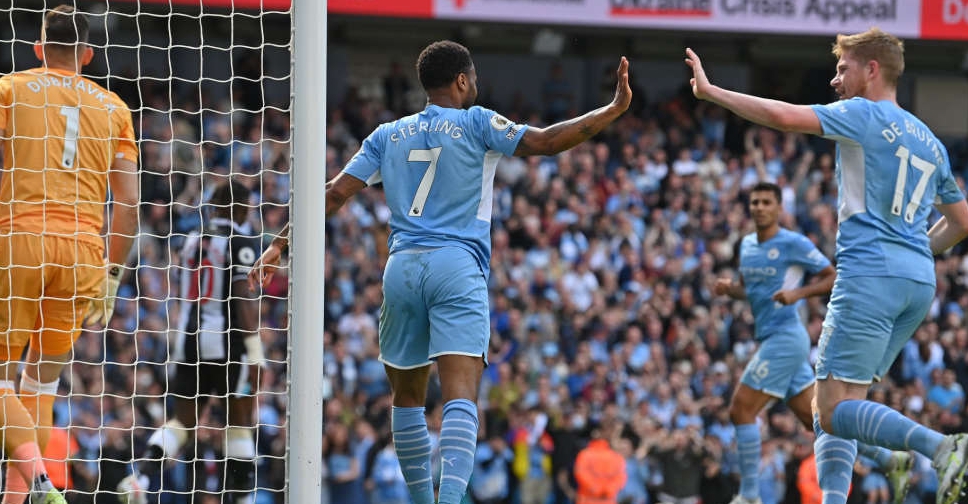 Manchester City lifted the gloom of their Champions League exit to seize control of the Premier League title race with a 5-0 hammering of Newcastle United.

Any lingering disappointment following their dramatic semi-final loss against Real Madrid was swept away as Raheem Sterling struck twice for City in the sunshine at The Etihad Stadium.

Aymeric Laporte, Rodri and Phil Foden were also on the scoresheet as they reclaimed top spot and moved three points ahead of Liverpool who drew with Tottenham Hotspur on Saturday.

Both sides have three games left to play and City now also have a four-goal superior goal difference.

"The margin between us and Liverpool is so tight and goal difference can happen. It was important we win," manager Pep Guardiola said.

Sterling headed City into the lead after 19 minutes Laporte tapped in after 38 minutes.

Rodri lost his marker to head in Kevin De Bruyne's corner after 61 minutes and Foden got in on the act when Oleksandr Zinchenko's shot arrived at his feet and he diverted it in.

City saved the best to last with a flowing move allowing an unmarked Sterling to fire home.

The title race continues in midweek with Liverpool up against Aston Villa on Tuesday and City facing Wolverhampton Wanderers the day after.

Everton's 2-1 victory at Leicester City took them out of the relegation zone.

Defenders Vitalii Mykolenko and Mason Holgate both scored at the King Power Stadium to move Frank Lampard's side up two spots to 16th on 35 points, one point above the drop zone.

"The lads are fighting and we are fighting together as a club," Lampard said. "We have Watford in three days and everybody needs to reproduce those levels."

Leeds are heading in the other direction after a self-inflicted defeat at fourth-placed Arsenal.

An early quickfire double from former Leeds loanee Eddie Nketiah put Arsenal in firm control before the visitors were reduced to 10 midway through the first half when Luke Ayling was sent off for a two-footed challenge on Gabriel Martinelli.

Leeds did not have an attempt at goal until Diego Llorente's header beat goalkeeper Aaron Ramsdale in the 66th minute but Arsenal weathered a nervy finish to close out their fourth successive victory and solidify their hold on fourth place.

Arsenal are four points above fifth-placed Tottenham who they play on Thursday, and are only a point behind third-placed Chelsea.