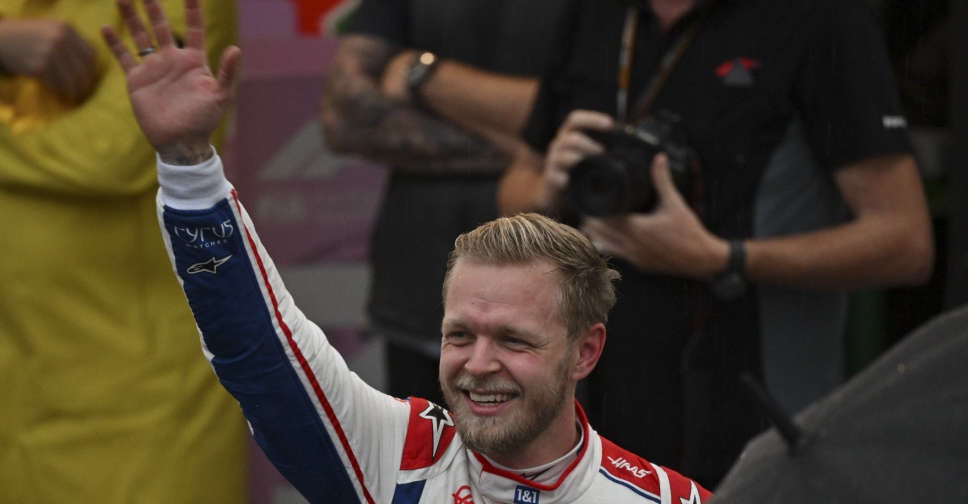 It was a rare moment of success for the Haas team as the Formula One backmarkers pull off an astonishing first pole position with Kevin Magnussen at the Sao Paulo Grand Prix on Friday.

Magnussen was first out of the pit-lane in the third and final qualifying session for Saturday's sprint race, benefiting from the best conditions before George Russell spun off in his Mercedes and brought a halt to the session.

Rain then meant nobody else could go quicker than Magnussen's time set on slick tyres.

The pole was his first at the 140th attempt, but in his 100th race for Haas, and also the first by a Danish driver in Formula One.

Magnussen said the pole was more surprising and felt better than his second place on his debut with McLaren in Australia in 2014, when he had no idea what to expect and felt 'king of the world' before the hard lessons that followed.

"I still can't really believe it," he said.

"What a phenomenal job the team did to put me out on pit lane as the first car to give me the best piece of track. It was starting to rain so that was the crucial part today, just getting that best track for me.

"In this sport you go up and down, or at least I do. It's a lot of fun when it's days like this."

"These are things that if you dream about it, you are scared to dream about it," said team boss Guenther Steiner, whose American team owner Gene Haas turns 70 on Saturday and has more often than not been presented with a fork when the occasion demands a spoon.

"The whole team is trying hard since seven years and then circumstances let us pull this one off. I think it was not luck. It was well deserved from the driver and team being on the right tyres at the right time."

Haas are eighth out of 10 teams in the constructors' standings and the surreal afternoon was highlighted by their other driver Mick Schumacher qualifying last for a race that determines Saturday's sprint grid.

The team had dropped Magnussen at the end of 2020 but Steiner brought the Dane back this season when oligarch's son Mazepin was ruled out by sanctions triggered by Russia's February invasion of Ukraine.

"You will always have nay-sayers but welcome to our pole position, nay-sayers," said Steiner in response to those who questioned what his men could achieve.

The Italian, whose direct approach and colourful language has made him a cult hero for millions through the popular Netflix 'Drive to Survive' docu-series, reacted in typical fashion.

"When it rains soup, you need to have a spoon ready," the Italian told Sky Sports television.

"And we had the spoon ready today."