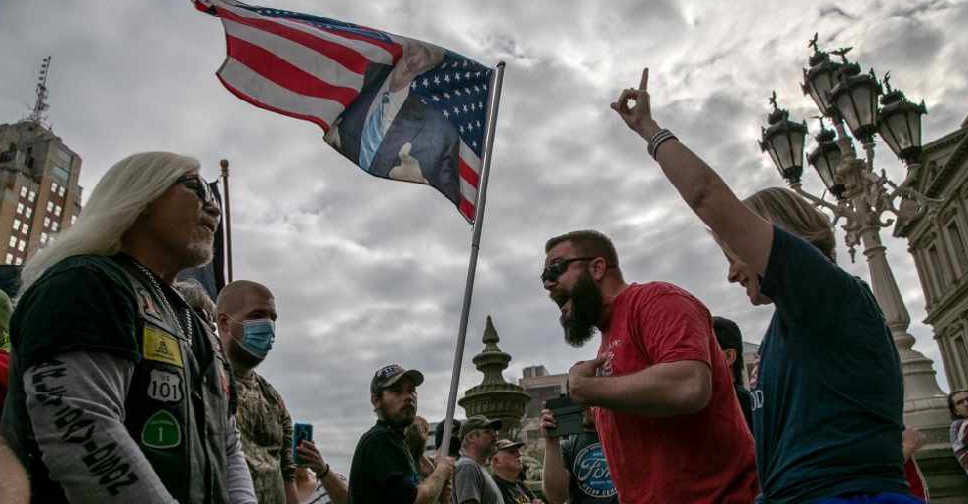 Conservative groups claiming without evidence that the November 3 election was stolen from President Donald Trump staged protests across the country.

Organisers of Stop The Steal, linked to pro-Trump operative Roger Stone, and church groups urged supporters to participate in "Jericho Marches" and rallies.

But groups of pro-Trump "Proud Boys" protesters and "Antifa" counter-protesters brawled in downtown Washington on Saturday night. Police moved in quickly to separate them, using pepper spray on members of both sides, Reuters witnesses said.

Around 200 members of the Proud Boys, a violent far-right group, had joined the marches earlier on Saturday near the Trump hotel. Many wore combat fatigues, black and yellow shirts and ballistic vests, carried helmets and flashed hand signals used by white nationalists.

Earlier, police in riot gear and on bicycles kept the opposing demonstrators apart by blocking streets. After dark fell, the protesters splintered into smaller groups to roam the streets in search of their rivals.

Protests were also held in other communities around the country, including Atlanta, Georgia, another state where Trump's campaign has sought to overturn Joe Biden's election victory, and Mobile, Alabama, according to local news coverage.

Local media in the Washington state capital of Olympia reported that one person was shot and three arrested after clashes between pro- and anti-Trump protest groups.

More than 50 federal and state court rulings have upheld Biden's victory. The US Supreme Court on Friday rejected a long-shot lawsuit filed by Texas and backed by Trump seeking to throw out voting results in four states.

"Whatever the ruling was yesterday... everybody take a deep, deep breath," retired Army General Mike Flynn, Trump's former national security adviser, told protesters in front of the Supreme Court, referring to the court's refusal to hear the Texas case.

Flynn who twice pleaded guilty to lying to the FBI about contacts with the former Russian ambassador, spoke in his first public address since Trump pardoned him on November 24.

"My charge to you is to go back to where you are from" and make demands, Flynn told the crowd, without being more specific. The US Constitution is "not about collective liberty it is about individual liberties, and they designed it that way," he said.

Trump, a Republican, has refused to concede defeat, alleging without evidence that he was denied victory by massive fraud. On his way to Andrews Air Force Base and then the Army-Navy football game in New York, Trump made three passes in the Marine One helicopter over the cheering protesters.

During his first debate with Biden in September, Trump gave fuel to the Proud Boys movement by telling the group to "stand back and stand by." He later said he condemned the group and "all white supremacists."