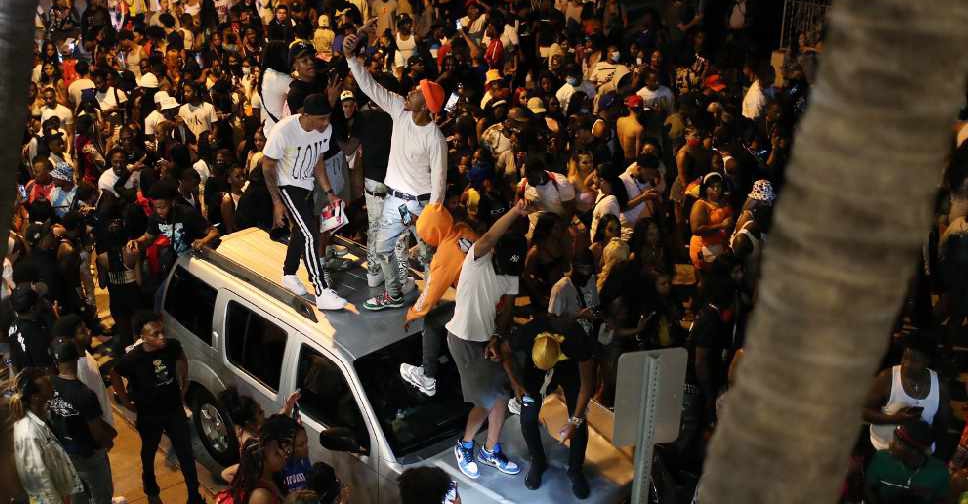 Miami Beach officials have voted to extend the curfew and emergency powers for up to three weeks to help control unruly and mostly maskless crowds that have converged there during spring break.

Mayor Dan Gelber told an emergency meeting of the city commission that all manner of out-of-town and out-of-state visitors, not just college students, were filling the streets since Florida Governor Ron DeSantis on February 26 called the state an "oasis of freedom" from coronavirus restrictions.

"It looked like a rock concert. All you could see was wall to wall people," Interim City Manager Raul Aguila told the commission.

"This is not a typical spring break crowd... These are individuals coming into the city... to engage in lawlessness and anything goes party attitude."

Aguila said he noticed a surge on Friday night and imposed emergency powers on Saturday. That included authorities setting a curfew and closing streets in the area, citing in an emergency declaration "multiple fights, brawls, melees, and other public displays and disturbances of the peace".

The commission on Sunday agreed to grant Aguila the authority to extend the measures for up to three more seven-day periods as needed, starting on Tuesday.

Video and photos posted on social media showed thousands of spring breakers, many eager to let off steam after a year of COVID-19 lockdowns, packed together and dancing in the streets as police struggled to enforce the curfew, firing pepperballs at the crowd.

Police said they had arrested more than 50 people and confiscated eight firearms since Friday, according to a Twitter post on Sunday afternoon.

Hundreds of people reconvened on Sunday night, attempting to recreate the party atmosphere, but police dispersed the crowd, images on social media showed. There were no reports of mass arrests or major confrontations, the Miami Herald reported.

The Miami Beach Police Department did not respond to a request for comment.

Gelber said the mass crowds gathered at a time when the surrounding county was experiencing 1,000 new infections of COVID-19 each day and with 50 to 100 people being hospitalised each day.

Many Miami Beach locals took to social media to blame out-of-towners for the chaos.

"Don't blame Miami for those crowds on South Beach. Nobody who's from Miami goes to South Beach," one Twitter user named Silas P. Silas wrote, eliciting approval from fellow residents.

Concerns over public safety prompted some businesses to close their doors voluntarily during what would normally be among their most profitable days of the year and after months of hardship caused by the pandemic.