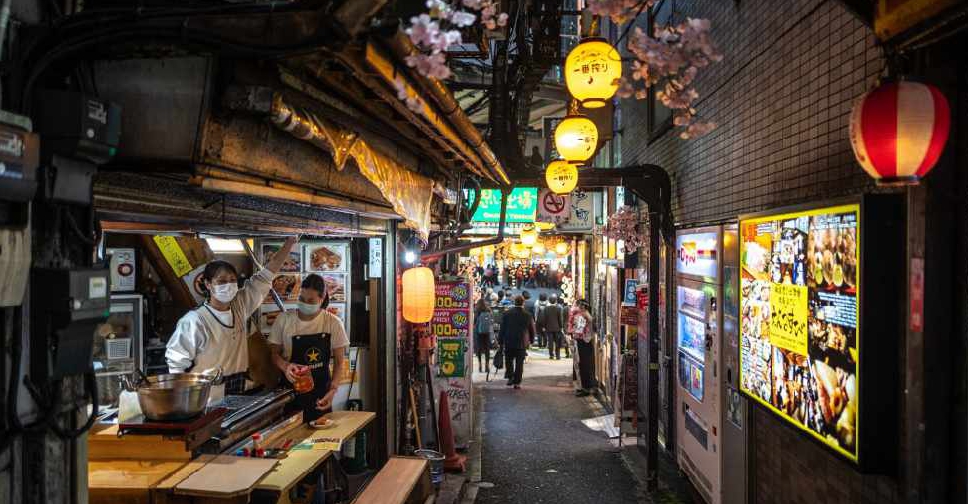 Staff members work in a restaurant along the Omoide Yokocho alleyway in Tokyo's Shinjuku district, ahead of a declaration of a new coronavirus state of emergency (Philip FONG / AFP)

Japan declared "short and powerful" states of emergency for Tokyo, Osaka and two other prefectures on Friday as the country struggles to contain a resurgent pandemic just months ahead of the Olympics.

Under a new state of emergency for April 25 to May 11, the government will require restaurants, bars, and karaoke parlours to close, and big sporting events to be held without spectators, Economy Minister Yasutoshi Nishimura said.

Breaching the restrictions will in some cases carry penalties under a recently revised law, he said.

"We absolutely have to limit the movement of people, and we have to do it decisively. We need powerful, short and focused measures," he said, asking people to remember the lockdowns of last spring and stay at home.

Prime Minister Yoshihide Suga announced the new restrictions after they were formally approved by a government task force and will hold a news conference at 1100 GMT to explain the decision.

Department stores, cinemas and other commercial facilities larger than 1,000 square metres will need to close while companies will be asked to make allowances for people to work from home. Schools will remain open.

The state of emergency - a third round for Japan that also includes Kyoto and Hyogo - will cover nearly a quarter of the population and last through the "Golden Week" holidays, dealing a further blow to the tourism and services industries.

"We will be asking for illuminations and neon signs to be turned off," Tokyo Governor Yuriko Koike told a news conference.

"It will be dark at night," she said, adding she hoped the initiative would discourage people from going out at night. Koike also asked non-residents to refrain from entering Tokyo, if possible.

Japan has so far avoided an explosive spread of the pandemic that has crippled many countries. There have been a total of about 550,000 cases and 9,761 deaths, which is significantly lower than the numbers seen in other large economies.

But the latest rise in infections has stoked alarm, with a surge in the mutant variant and a critical shortage of medical staff and hospital beds in some areas. Japan's vaccination drive remains sluggish.

Organisers of the Tokyo Motor Show on Thursday cancelled the marquee event for this year, in a move likely to raise more questions about the government's insistence that the Tokyo Olympics will go ahead this summer after a year's delay.

Games organisers said on the same day that a policeman who worked with the torch relay had tested positive for the virus, a first for the event.

"I hope the coronavirus situation improves with the countermeasures the government, Tokyo, and other regional governments have put into place," she told a news conference on Friday.

"We, as Tokyo 2020, continue to wish for the swift return to normalcy and will continue to work closely with the relevant parties to make sure a safe and secure Olympics can happen."

Tokyo reported 759 new infections on Friday, down from 861 a day earlier when the tally was the highest since Jan. 29, during the previous state of emergency.

Several other prefectures remain in a "quasi-emergency" state of targeted infection controls, and Nishimura said the duration would also be extended to May 11 for some.