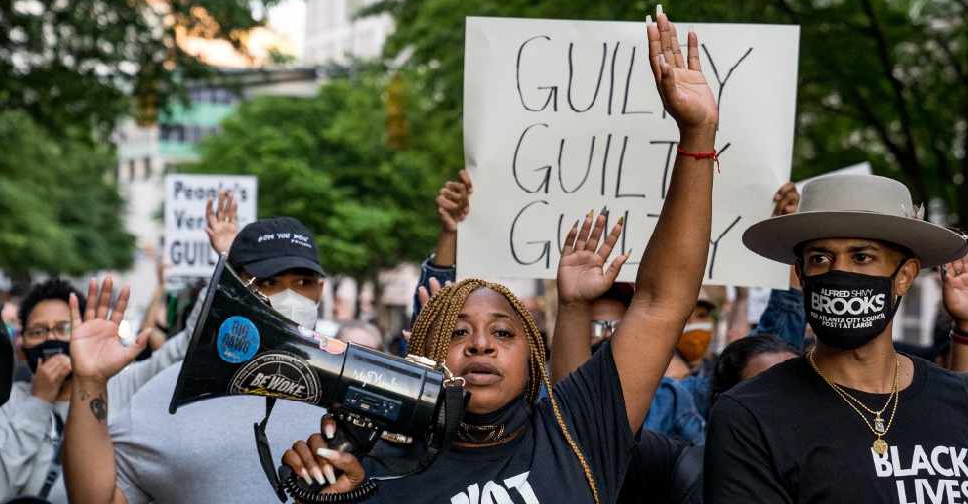 Americans reacted with jubilation and relief after a jury found former Minneapolis police officer Derek Chauvin guilty of murdering George Floyd during an arrest last May.

But elation over the trial's outcome, capping nearly a year of social upheaval, racial tensions and political strife stoked by Floyd's killing, was tempered by calls for a continued fight against inequalities pervading the US criminal justice system.

In George Floyd Square, the Minneapolis traffic intersection named after the 46-year-old Black man who died with his neck pinned to the street under Chauvin's knee, throngs of people screamed, cheered and applauded at the news of the guilty verdict.

The square has become a place of pilgrimage and protest since Floyd's death made him the face of a national reckoning with racial injustice and police brutality.

His dying words, "I can't breathe," were recalled in street demonstrations against his killing that convulsed the United States and the world last year in the midst of the coronavirus pandemic.

A brass band played in a church parking lot as several hundred milled about the square where a large wooden sculpture of a raised fist sits surrounded by flowerbeds and images of Floyd and other Black people killed by police.

A 12-member jury found Chauvin, 45, guilty of all three charges against him - second- and third-degree murder and manslaughter - after hearing three weeks of testimony and deliberating for just over 10 hours.

The verdict brought cheering people to the streets and motorists honking their horns in a number of major U.S. cities, including Washington and New York City, according to social media. In Brooklyn, a crowd gathered outside Barclays Center to celebrate.

Tears rolled down the face of Chris Dixon, a 41-year-old Black Minneapolis resident, as he heard the verdict with a crowd outside the Hennepin County courthouse where the trial was held.

"As a country we don't have a history of holding police accountable. And when you are a Black man, that's difficult to deal with and swallow every day," Dixon said.

The verdict brought new hope, he said. "Not just Black people, but folks of all different races and cultures just said this was unacceptable."

For many, the sense of joy was blunted, however, by the tragedy of Floyd's death and awareness that racial inequality remains deeply rooted in American society.

Protesters outside the courthouse called for a continued focus on the prosecution of another Minnesota police officer, Kimberly Potter, charged with manslaughter after shooting a young Black motorist, Daunte Wright, during a traffic stop on April 11 several miles away in the suburb of Brooklyn Center.

Officials in Brooklyn Center, embroiled in several nights of clashes between protesters and police following Wright's death, set an 11:00 pm curfew for Tuesday.

Early reaction was also somber in Floyd's hometown of Houston, where a childhood friend, Travis Cains, said it was crucial that Chauvin be sentenced to the full extent of the law.

Authorities in Minnesota and elsewhere had braced for an outpouring of rage expected had the jury acquitted Chauvin or deadlocked in a mistrial.

Citing the "threat of civil unrest," Minnesota Governor Tim Walz on Monday had declared a preemptive state of emergency for the Minneapolis metropolitan area and requested security assistance from other states.

Many businesses in Chicago boarded up their windows in anticipation of possible disturbances. Florida Governor Ron DeSantis on Monday signed an "anti-riot" bill into law, imposing tougher penalties for people found to have engaged in violent protests. He noted then his expectation of potential fallout from a Chauvin trial verdict.